Schoolboys side dominate but fail to find the net 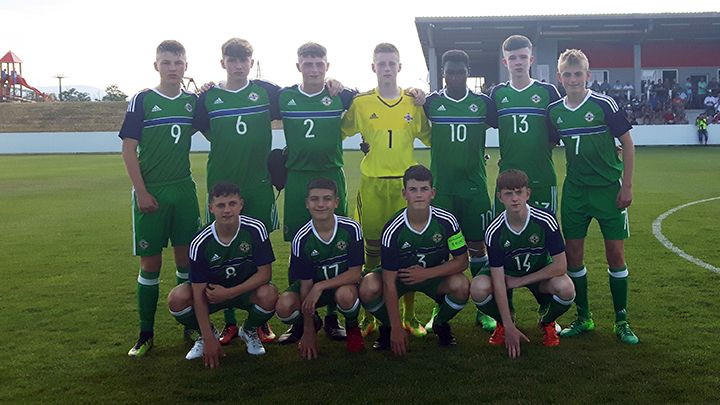 Northern Ireland’s Under-15 Schoolboys side registered a scoreless draw in the first of their two international friendlies against Austria’s U15s this week.

It was a fairly even first half but Northern Ireland dominated after the break and deserved more out of yesterday’s game.

The match at Eggendorf in eastern Austria was played in blazing sunshine – in temperatures reaching 35 degrees – so it was no real surprise that the pace was slow at the start.

After 17 minutes Alberto Almanzar carved open the home defence to send George Tipton through but with only the keeper to beat the Northern Ireland striker could only find the side netting.

Ten minutes later Michael Glynn missed another opportunity as he collected a long ball from Jessie Carson and rounded the full-back but as he closed in on goal he lost control and the danger was cleared.

Austria's best chance came just before the break when Denizcan Cosgun drifted past two defenders and unleashed a powerful right foot drive which crashed against the upright.

After the interval, as the temperature cooled, Northern Ireland took control with Ben Wylie and Carl Johnston dominating in midfield.

On 53 minutes Almanzar thought that he had broken the deadlock when he shot home from close range but the goal was disallowed for offside.

Almanzar was a constant threat to the Austrian defence with his surging runs down the left. The powerful striker seemed certain to score as he broke through once again but Austrian keeper Nikolas Polster was quickly off his line to block his shot.

The introduction of Naseem Ouldhamlat increased the threat as he combined well with Almanzar to terrorise the home defence. In the final minute a neat pass from Almanzar sent Ouldhamlat through but he shot tamely at the keeper.

The teams meet again at Enzesfeld-Lindabrunn tomorrow (Thursday 22 June) in the second and final game of the short tour - and U15 manager Darren Murphy will be hoping that his side not only maintain their unbeaten record but with better finishing add to it with a victory.