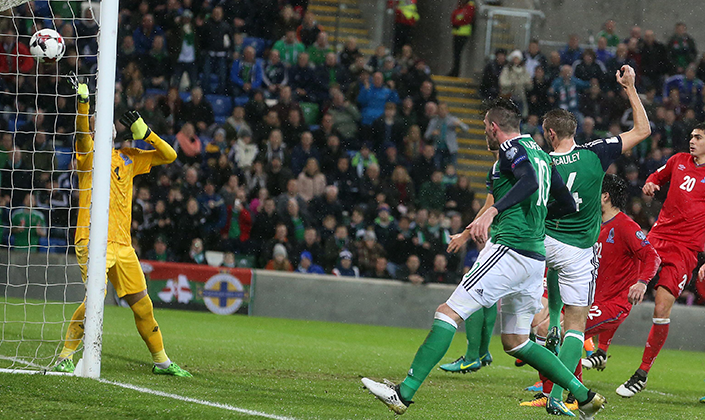 Northern Ireland are back in competitive action today when Michael O’Neill’s side face Azerbaijan in Baku in a crucial FIFA World Cup qualifier (kick-off 5pm GMT).

After starting the campaign with back-to-back victories over San Marino and Norway, Azerbaijan have only picked up one point from their last three outings.

Amongst those was a 4-0 reversal the last time Robert Prosinecki’s side faced Northern Ireland, and his opposite number will no doubt be hoping that form carries into this game as the battle for second spot in Group C gathers pace.

O’Neill is without Craig Cathcart for the game after the Watford man was ruled out with a knee injury. Also missing for a variety of reasons are Paddy McNair, Corry Evans, Chris Baird, Jamie Ward, Luke McCullough and Conor Washington.

Star Players
Dimitrij Nazarov can play either in the middle of the park or upfront. Indeed, his prowess in front of goal saw him find the net nine times for Bundesliga 2 side Erzgebirge Aue last season, a goal tally that played a huge part in an ultimately successful battle against the drop. He has bagged six goals in his 23 appearances so far, including a strike against Germany back in March.

One To Watch
Goals have been a rare commodity for Azerbaijan lately so when they score two in one game, and in an away victory too, the players responsible warrant a closer look.

One of those, Araz Abdullayev, grabbed the winner which saw Prosinecki’s side defeat Qatar in Doha in March. A midfielder, the 25-year-old turns out for Qabala FK, helping them to the runners-up spot in both the league and cup in the season just finished.

Internationally, he was first called up in 2008 for a World Cup qualifier against Finland which, at the tender age of 16, made him Azerbaijan’s youngest ever international. Since then he has gone on to clock up 21 appearances.

Famous Players
With 109 appearances Rashad Sadygov is Azerbaijan’s most capped player of all-time, and the 34-year-old is showing no signs of letting up!

The FK Qarabaq defender started against both Qatar and Germany earlier this year, continuing an international career that kicked off back in 2001 against Sweden.

Previous Meetings
Despite only being a member of FIFA since 1994, Azerbaijan and Northern Ireland are no strangers to each other, with Saturday's clash being the sixth between the nations, each one coming during a World Cup qualifying campaign.

The first meeting, in Baku in 2004, ended scoreless. The return, on 3 September 2005, saw second half goals from Stuart Elliott and Warren Feeney set Lawrie Sanchez's side up for that altogether more famous defeat of England four days later.

Azerbaijan came back to Belfast in 2012, when a David Healy goal six minutes into added time salvaged a point for Northern Ireland.

Most recently, of course, the last meeting came during the current campaign in November when goals from Kyle Lafferty, Gareth McAuley, Conor McLaughlin and Chris Brunt helped Northern Ireland to a sweeping victory.