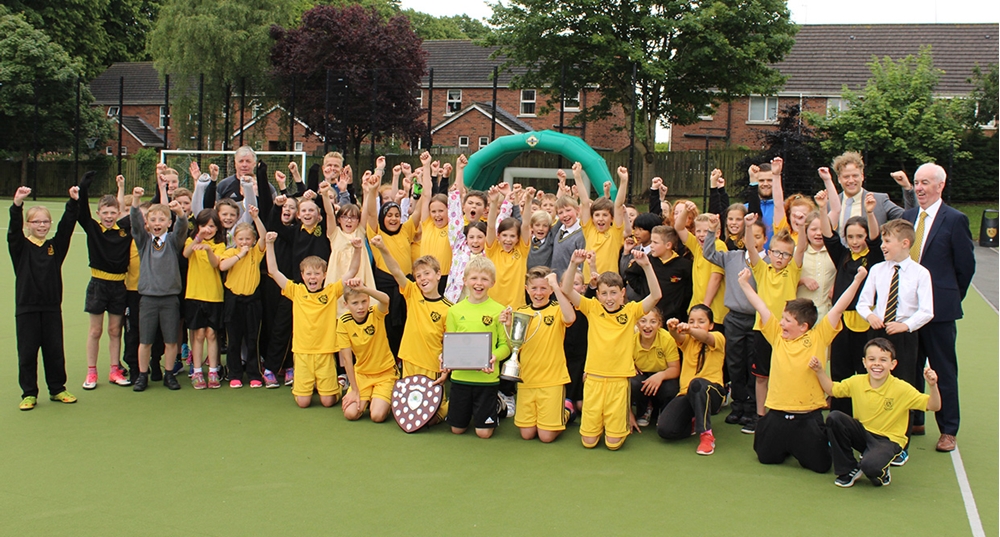 Through the programme the association strives to maximise the number of schoolchildren exercising and playing football, enhance grassroots football, build capacity in schools and develop school and club links.

He pointed out: “King’s Park play in a variety of competitions throughout the year and always give the pupils the opportunity to participate. To be the first primary school to achieve the gold accreditation shows the school’s focus on football and the commitment of the staff to go above and beyond to provide after-school activities.

“King’s Park’s structures and processes will be used as examples of best practice to assist other schools in gaining a quality mark accreditation.”

“The promotion of sport and in particular of football for both boys and girls has been very much part of our school’s development plan over recent years. King’s Park has a long history of producing footballers who have gone on to play at senior level in the Irish League and beyond,” said Ashton Shields, head of football at King’s Park.

“Over recent years we have developed a number of partnerships through which we have encouraged sporting excellence at all levels in our school. The catalyst for much of our recent success was the construction in 2012 of a full-size Multi-Use Games Area within our school grounds.

“This surface has proved to be a major asset in developing all pupil participation, enjoyment of active learning and in coaching the finer skills over a wide range of sports, football being a major beneficiary.”

He also pointed out several teachers at the school have Irish FA coaching qualifications which are transferable to other sports, while football is a major ingredient of King’s Park’s extensive after school clubs programme. Futsal is also now part of that programme.

He explained Irish FA coaching and development personnel have been working in the school for several years - and their input has been greatly valued by staff and children alike.

The head of football further revealed Lurgan-based Irish Premiership side Glenavon have been “extremely encouraging” and have provided the school with coaches ranging from Level One to UEFA A and Pro level coaches. And another local side, Lurgan Town, have also played their part in developing the skills of the pupils attending King’s Park.