Nicholl’s side still have outside chance of making elite round 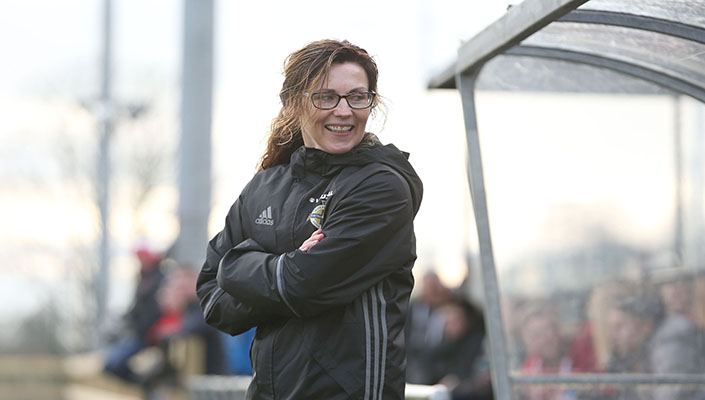 Northern Ireland Women’s U17s were narrowly pipped by Switzerland to second spot in a qualifying round for the UEFA WU17 Euros.

Alison Nicholl’s squad registered a win, a draw and a defeat over the past week in a mini qualifying tournament in Greece.

They ended their campaign with an emphatic 5-0 victory against Kazakhstan earlier today, however the Swiss, who also secured four points overall, finished second in the group thanks to a better goal difference.

In their first game Northern Ireland lost 3-1 against Greece before drawing 1-1 with Switzerland.

The Swiss also beat Kazakhstan 5-0 but only lost to the high-flying Greeks by two goals to one earlier today – and therefore pipped Northern Ireland to second spot in the group by a single goal.

Northern Ireland still have an outside chance of making it through to the elite round though.

The top two sides in every qualifying group plus the four third-placed teams with the best record against the top two in their section go through to the elite round.

Alison Nicholl’s team are currently among the top four third-placed teams but they will not know their fate until all mini qualifying tournaments are completed on 28 October.

Elite round games are due to be staged in spring 2019 – and seven elite round group winners will join hosts Bulgaria in the finals from 5-17 May next year.

Today’s game against Kazakhstan - it was played at Zossimades in Ioannina - saw Cliftonville Ladies defender Toni-Leigh Finnegan bag a hat-trick, with two of the goals coming from the penalty spot. The other scorers were Sophie Megaw and Breckyn Monteith.

Finnegan opened the scoring from 12 yards in the 44thminute and three minutes later Lisburn Rangers midfielder Megaw doubled the lead. Finnegan then scored from open play on 48 minutes before lashing in a second penalty in the 65thminute. The final goal was scored deep into injury time by Monteith, who plays for Charlotte Soccer Academy in the US.

In their first game, against the Greeks at Zossimades, the WU17s played well against the host nation.

Ionna Pachaki opened the scoring for Greece in the 12thminute before Linfield Ladies striker Caitlin McGuinness grabbed an equaliser on 23 minutes.

Both teams then created chances before a Libby Gilmore own goal in the 55thminute saw the hosts edge in front, and they increased their lead through Chrysanthi Voila 11 minutes later.

In game two, played at Kranoula Municipal Stadium in Ioannina, McGuinness was on target again, netting in the sixth minute. But Ella Ljustina popped up with an all-important equaliser for the Swiss early in the second half.