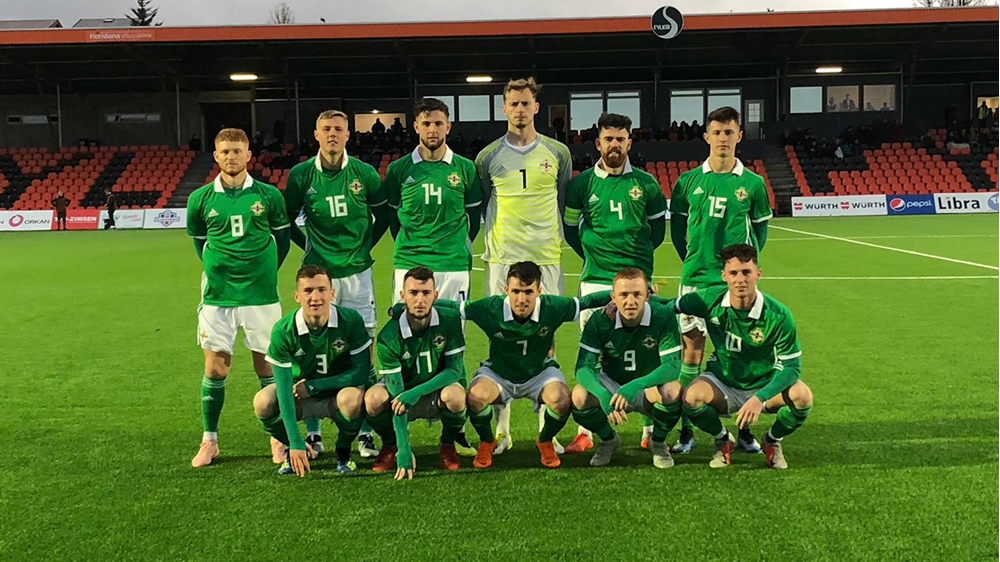 In wet and windy conditions in Reykjavik, Ian Baraclough’s side looked to be heading for a 0-0 draw, until the young defender rose from a corner to head home the winner at the death.

The first half started brightly for both sides with the hosts creating the opening chance of the game. Conor Hazard was called into action on 16 minutes as Arnor Sigurdsson let fly from 25 yards out. The Celtic stopper did well to parry the ball to safety as it was heading inside the left-hand post.

Baraclough made an early re-shuffle to his side as Liam Donnelly moved from centre-half into midfield with Jamie McDonagh dropping to right-back and Ballard moving to the heart of the defence alongside Pierce Bird.

Northern Ireland’s first effort on goal came on 23 minutes. Paul Smyth picked the ball up on the left and made a driving run into the area, the Icelandic defender got a foot to it and the ball dropped to Jordan Thompson just outside the box. The Blackpool man took a touch and hit a curling effort which unfortunately dipped just over the crossbar.

Iceland produced a great chance to go ahead on 35 minutes, but Friðjónsson couldn’t hit the target from 10 yards as the ball was knocked down from a free kick from the left touchline.

Northern Ireland’s movement in the final third looked dangerous and they went close again just before the break. Dale Gorman slid an almost perfect pass through the defence to Smyth in the box, who was just beaten to it by Fridriksson in the Iceland goal.

In an end-to-end game, Iceland went close again almost straight away as Sigurdsson curled one from the left just past Hazard’s far post.

The chance of the half came on 45 minutes and it fell to the hosts. Kristinsson went clear down the right-hand side having hurdled a challenge from Pierce Bird and went one-on-one with Hazard. He squared it to Karlsson who looked certain to score from 8 yards, but Ballard got himself into a great position and blocked the low shot on the line. Fantastic defending from the young Arsenal defender to keep the scores level at the break.

In a cagey start to the second half, Northern Ireland created their first opening on 52 minutes. Rory Holden carried the ball well into the Iceland area and squared it to Donnelly on the edge who could only put his effort well over the crossbar.

Northern Ireland looked to have won a certain penalty on 72 minutes but the referee waved it away. Some quick movement down the left set Thompson bursting into the area and the Icelandic defender appeared to bring him down with a trailing leg.

The decisive goal came with one minute to go as McDonagh whipped a fantastic in-swinging corner in from the left and Ballard headed it down into the Iceland net. A excellent set piece from the young side. That proved the final chance of the game.

Victory keeps Northern Ireland’s chances of finishing second in the group alive, with the decisive match taking place on Tuesday night against third place Slovakia, who have a game in-hand. That match takes place at the National Football Stadium at Windsor Park kicking-off at 7.30pm.

Children aged under-16, Campaign Card holders and Official Members will receive free tickets. For those wishing to purchase tickets can do so by CLICKING HERE.