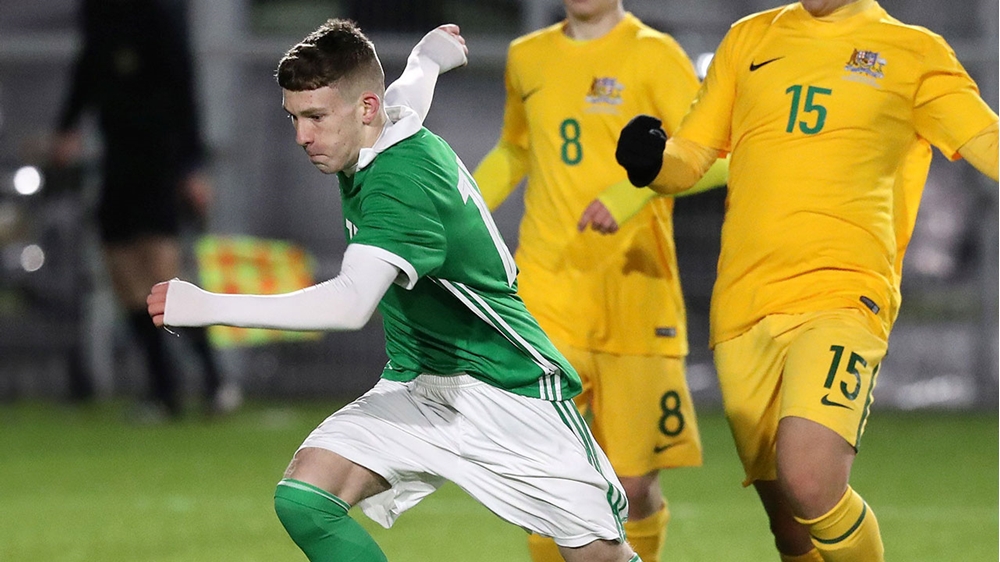 Northern Ireland’s Men’s Under-17s completed their 2020 U17 Euros qualification campaign with an excellent victory over Luxembourg.

The goals flowed in the game at Stade Henri Dunant in Beggen with Stephen Frail’s boys eventually running out 7-0 winners.

Following defeats to Turkey and Italy, Northern Ireland were keen to turn on the style in their final game in the four-team mini tournament staged in Luxembourg which acted as a qualifying round for the 2020 U17 Euros. And they certainly did just that.

Sean McAllister opened the scoring after just a minute. Ross McCausland played him in and he made no mistake.

Northern Ireland were 2-0 up after just nine minutes. This time it was Cameron Stewart getting his name on the scoresheet.

And they were three up after 12 minutes. Dane McCullough found McCausland and the striker gobbled up the opportunity.

Both sides had chances before Frail’s side extended their lead further on the half-hour mark. McCullough was fouled in the penalty area and McAllister grabbed his second goal of the game by slotting home the spot kick.

Northern Ireland keeper Conor Manderson then made a couple of decent saves before the boys in green and white made it 5-0 on the stroke of half-time through Ciaran McGuckin.

McAllister missed a couple of opportunities to complete a hat-trick just after the restart and then Charlie Allen missed the target minutes before he fired a cross into the area which led to an own goal, Luxembourg substitute Noah Rossler.diverting the ball past his own keeper on 61 minutes.

However, Allen scored in his own right eight minutes later when he swept the ball past Luxembourg keeper Evan Da Costa E Sousa to make it 7-0.

Further chances followed for Northern Ireland, with Matthew Walker, Allen, Charlie Lindsay and Stewart all coming close, however Frail’s charges had to settle for seven in the end.

The result meant Northern Ireland finished third in the group but the victory was not enough to earn them a place in the elite round, the next stage of qualification.

Image: Charlie Allen was on target in the 7-0 win over Luxembourg’s U17s.