Lafferty, Niall McGinn and Josh Magennis all get on the scoresheet 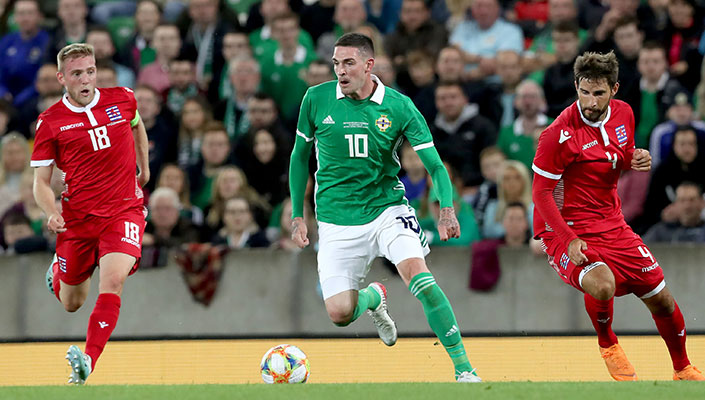 Striker Kyle Lafferty’s first goal for his new club Sarpsborg 08 was enough to secure them a vital point as they drew 1-1 at home with Brann at the weekend.

With the relegation-threatened Sarpsborg a goal down the 31-year-old Fermanagh-born forward came off the bench to hit an 89th minute equaliser and he admitted it was a relief to finally open his account for the Norwegian top flight club.

“I’ve been here a while now,” Lafferty told the club’s official website, “and to get that first goal and to take that weight off your shoulder was important.

“The first half we looked a wee bit tired but we came out after the break and we were the better team.

“A point is probably a fair result but I think the lads are gutted we didn’t go on and win the game because we had the chances,” he added.

“We have five games left and we’re still there and still fighting.”

Meanwhile in Scotland Niall McGinn grabbed his second goal of the season, and his 80th for the club, as Aberdeen eased to a 3-0 victory at Stephen Robinson’s Motherwell.

Talking about McGinn’s goal after the game boss Derek McInnes said: “I thought he should have reversed it for Gallagher as he was in a better position!

“However, Niall just used him and it was a brilliant finish in the end but we’re used to that from him over the years.”

Also on the scoresheet over the weekend was striker Josh Magennis who bagged his first goal at home for Hull City as they lost 3-2 at the KCOM Stadium to QPR in the Championship.

Former under-21 international Callum Camps was among the scorers as League One Rochdale won 3-1 at bottom-placed Bolton Wanderers, while current under-21 midfielder Shea Gordon found the net for the fifth time this season as Partick Thistle defeated Dundee 3-1 at Dens Park.

There was good news for Michael O’Neill as Jamal Lewis played the full 90 minutes for Norwich City after recovering from a knee injury which kept him out of the recent internationals against the Netherlands and Czech Republic.

The talented left-back helped the Canaries to their first Premier League away point of the season as they drew 0-0 at Bournemouth, though goalkeeper Michael McGovern returned to the substitute’s bench to make way for the returning Tim Krul.

Finally, former Glenavon player Bobby Burns, who is currently on loan at Newcastle Jets from Hearts, made his competitive debut for his new club as the Australian A League season kicked off yesterday.

The 20-year-old came on as a substitute at half-time as the Jets drew 1-1 at Central Coast Mariners and Burns was pleased the season had finally got under way.

“It’s been a great few weeks training as part of their pre-season,” said Burns. “However it was brilliant to finally get the season started.

“It was a fantastic game to start with, a derby in front of a good crowd of 9000, and hopefully I can now start to establish my place in the team as I feel fitter than ever.”