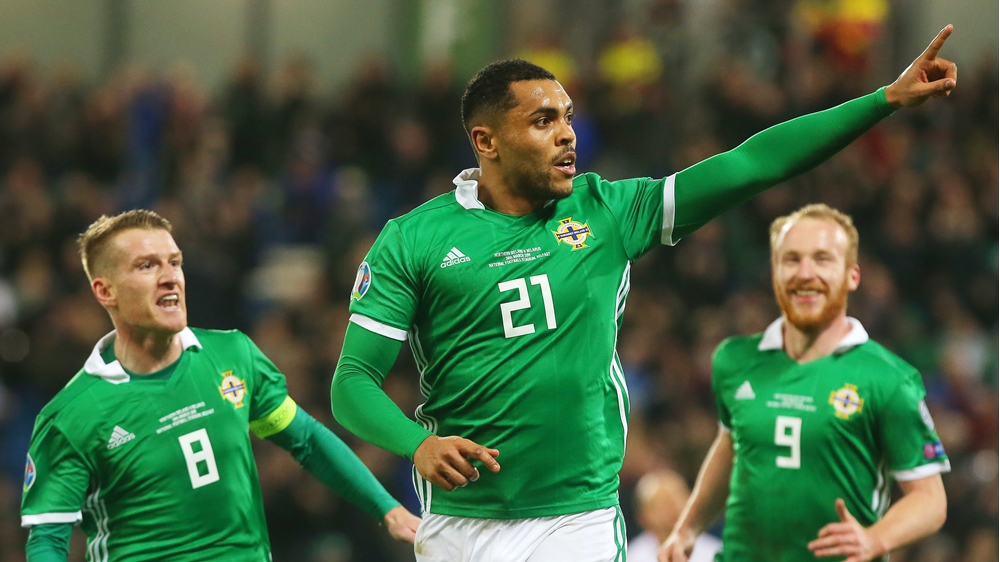 Striker Josh Magennis made it two goals in two games after he opened the scoring for Hull City in their 2-1 victory at Nottingham Forest in the Championship last night.

However, the 29-year-old’s joy was marred after he picked up a straight red midway through the second half at the City Ground for a rash tackle on Nottingham Forest midfielder Ben Watson.

Hull boss, and former Northern Ireland midfielder, Grant McCann said the former Glentoran player could have no complaints after his second sending off of the season, though he felt Forest defender Joe Worrall should also have been dismissed for a similar challenge earlier.

“The biggest thing that disappointed me was the Josh Magennis sending off,” said McCann. “If we’re going to give that as a red card then Worrall should’ve had one in the first half for the tackle on Jon (Toral). It was exactly the same.

“I think they’re both red cards. Josh knows. He’s led with his foot and it’s caught Watson.  If you’re going to send him off then you’ve got to be fair and consistent. That’s all we ask.”

Magennis is now looking at a four-game ban with his next appearance for the Tigers set to be the home game against Preston North End on 27 November.

“He’s disappointed,” added McCann. “He plays on the edge and I thought he was excellent. It’s frustrating that we’ll be losing him now for a few games because we want a consistent run from a forward who’s scoring goals.”

Also on the scoresheet in midweek was Sunderland striker Will Grigg who produced a man-of-the-match display following the Black Cats 5-0 win over Tranmere Rovers in what was new manager Phil Parkinson’s second game in charge.

After the victory Grigg said: “I thought we played at a really high tempo, got loads of crosses into the box and got our just rewards.

“We implemented the game plan really well. We wanted to be bright and get the goal which set the tone.”

“It’s easy to sit back like that but we didn’t,” added the 28-year-old, who also weighed in with an assist for Sunderland’s opener. “We were ruthless throughout and we continued to do what we wanted to.”

Meanwhile, Jamie Ward was among the goalscorers as Scunthorpe United recorded just their third win of the campaign with a 3-1 home success over high-flying Exeter City.

Ward’s 37th minute strike was his second in just three games since joining the League Two outfit last month and he was pleased to get the scoresheet again.

“I’m always delighted to score no matter what,” said the 33–year-old, “but the most important thing is three points.

“It was a great cross, and I’ve just seen Rory (McArdle) rising at the back post so I gave him a shout, and luckily enough he headed it straight to me and I was able get a good strike on the ball.”

Finally, Callum Camps continued his excellent form in front of goal with his sixth of the season, and his second in as many games, as Rochdale eased to a comfortable 2-0 win over MK Dons at Spotland on Tuesday night.