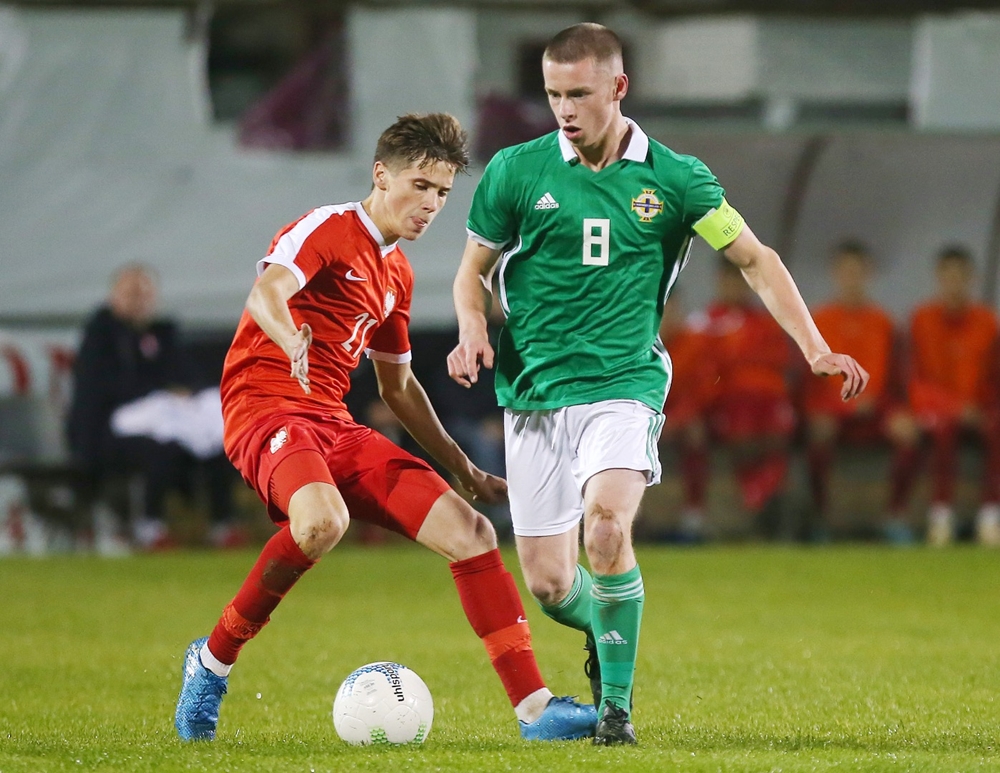 Northern Ireland’s U16 Schoolboys narrowly lost to Poland U16s in the second of their two challenge matches against the Poles this week.

The 1-0 win for Poland at The Oval meant honours were even across the two games. Northern Ireland won game one in Portadown by two goals to one.

It was the first defeat suffered by Gerard Lyttle's boys this season, however it could have been a different story if they had taken some of the chances they created, especially in the second half.

Poland made all the running in the early stages and indeed bossed the first half. On 21 minutes George Chmiel fired wide for the Poles and two minutes later he produced a fine shot on the turn which was brilliantly saved by Northern Ireland keeper Billy McDowell.

Adrian Tyminski then dragged a shot wide of the post before Norbert Paclawski was denied by another outstanding save from McDowell.

U16 boss Lyttle introduced five substitutes at half-time and the changes had an immediate effect. Within a minute of the restart Jamie Donley dispossessed a Polish defender and fired in a shot, however Polish keeper Bartolomiej Maliszewski saved low to his right.

In the slickest move of the match Conor Scannell sent Matthew Carson away down the left. The full-back drove a low ball across goal which just eluded Donley.

Donley was involved again soon afterwards as Charlie Lindsay and Jake Wallace combined to create an opening for the striker but his close range flick was turned round the post by Maliszewski.

On 62 minutes Poland took the lead against the run of play with a great goal. Tyminski made a powerful run down the left and pulled the ball back to Joshua Klockner whose left foot shot from the edge of the box went in off an upright giving McDowell no chance.

Soon afterwards Northern Ireland captain Jake Wallace was injured and had to leave the field. Northern Ireland had used all their substitutes and so had to play the last quarter of an hour with one player short.

Despite the numerical disadvantage it was the home team who remained on top. Lewis Tosh’s curling shot from 20 yards went inches wide, while the Poles just managed to block a close range effort by Carson.

With two minutes remaining Donley missed a great opportunity as Carson's free-kick found the striker six yards out but he was unable to apply the finishing touch.

In the final minute Polish substitute Marcel Ruszel had the chance to put the issue beyond doubt as he raced clear from the half-way line but with only McDowell to beat he scuffed his shot wide of the upright.

The games against the Poles were the final warm-up matches ahead of this year’s Victory Shield tournament, which is being staged at Colliers Park in Wrexham.