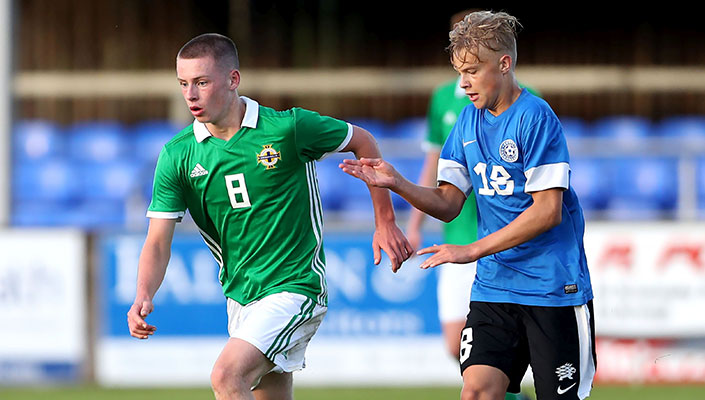 Northern Ireland’s U16 Schoolboys will gear up for the defence of the Victory Shield with two challenge matches against Poland U16s in Co Armagh and Belfast.

Gerard Lyttle’s team, who won 3-2 and drew 1-1 against Finland U16s last month, will take on the Poles as they complete their preparations for the defence of the Victory Shield later this month.

The U16s manager revealed: “Preparations have been good although it has been a challenge in terms of keeping everyone fit.

“The back to back games will be excellent preparation for the Victory Shield. I expect Poland to be big, strong and tactically and technically very good. We are coming into these games following two good results away to Finland so that will give our lads great belief and confidence.”

Northern Ireland will face Poland at Shamrock Park in Portadown tonight (14 October) at 7pm and then at The Oval in east Belfast on Wednesday (16 October), again with a 7pm kick-off.

Lyttle’s squad is along similar lines to the one chosen for the games in Finland, however two new faces are Everton midfielder Jason Coppack and Tottenham Hotspur striker Jamie Donley.

This year’s Victory Shield tournament is being staged at Colliers Park in Wrexham.

Image: Jamie McDonnell, seen here in action against Estonia U16s back in August, is in the squad to face Poland next week.