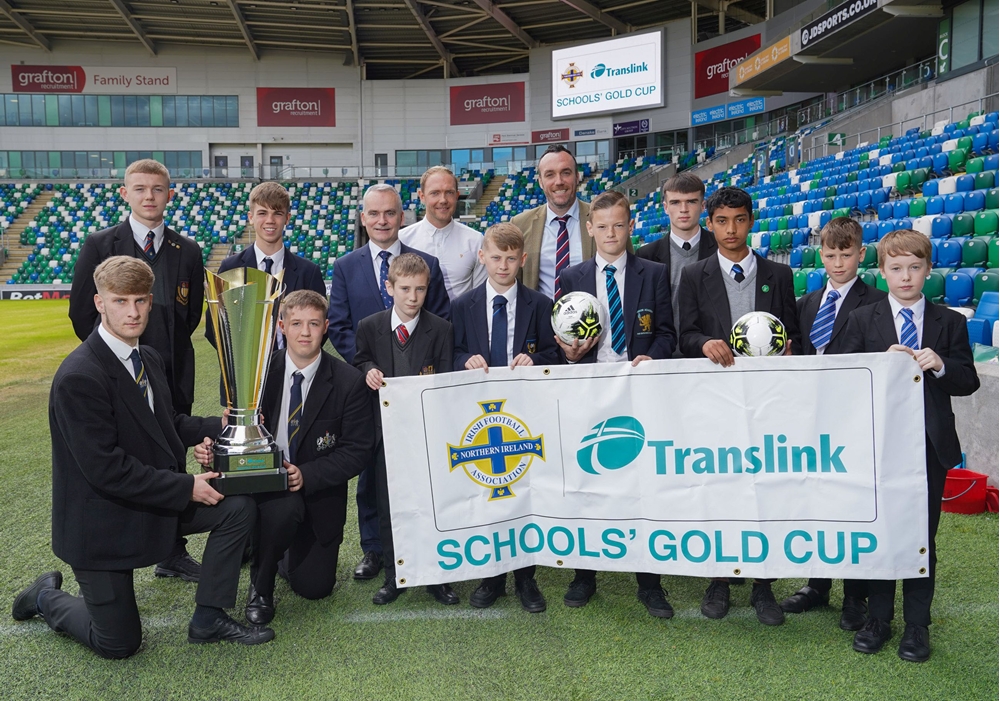 The Translink Schools’ Gold Cup is about to spring into action again.

The competition, which involves the eight post-primary schools who have been awarded the Gold Schools Quality Mark accreditation by the Irish FA Foundation, has returned this season following a successful first outing last term.

It will begin again tomorrow (Tuesday 24 September) and Belfast school and inaugural champions Our Lady and St Patrick’s Knock will no doubt be going all out to retain the trophy.

The Schools Quality Mark accreditation supports schools to put structures in place to develop football. The Gold Cup is the first competition involving schools playing each other across three age groups (U13, U15, U17).

Matchday one will see Our Lady and St Patrick’s Knock travelling the short journey to Ashfield Boys for an east Belfast derby.

And Lisburn’s Laurelhill are due to face North Belfast school St Malachy’s College in the first set of fixtures.

Michael Boyd, Director of Football Development at the Irish FA Foundation, said: “I am delighted to see the competition start its second year with Translink’s support. The Schools Quality Mark is a vital aspect of the Irish FA’s Let Them Play youth football strategy with over 55 schools already accredited with the award which ensures participants have the best opportunity to play football in schools.

“I am looking forward to seeing the competition progress this year and hope to see more schools involved in the years to come.”

“In particular we value the importance of promoting an active and healthy lifestyle – something this competition is all about. After the fantastic success of the inaugural competition I think we can all expect even more end-to-end action, talent and all-round good sportsmanship.”

Schools will be ranked by their performances over the three age groups with one school winning the Translink Gold Cup and claiming ‘Top Football Performance School’ status in Northern Ireland.

Chris Conway added: “I’d like to thank the Irish FA Foundation for working in partnership with Translink to deliver this fantastic initiative.

“I’d also like to pay tribute to all the coaches who train, motivate and inspire their players to be the best they can be. Good luck to all the teams - I hope they enjoy another fantastic competition.”