NI U16 Schoolboys: Cameron Crook on target but Lyttle’s team miss string of chances against Finland 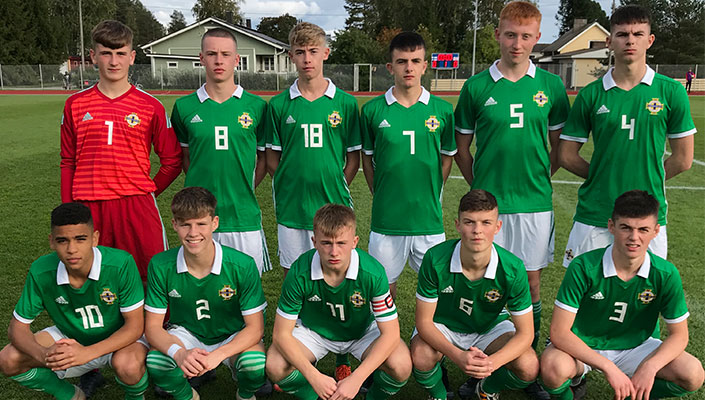 Northern Ireland’s U16s earned a 1-1 draw against Finland’s U16s in the first of two challenge matches against the Finns this week.

Gerard Lyttle’s team dominated the game in Urjala from start to finish but had to settle for a draw after missing a string of chances against a team who had recently defeated Sweden, Poland and Hungary.

Charlie Lindsay, who unsettled the Finnish defence throughout the game with his pacey runs, had a shot blocked after only two minutes and then Jamie McDonnell’s power-packed shot from 25 yards went narrowly over the bar.

The U16 Schoolboys’ aerial threat at set pieces was also evident. Twice Michael Forbes climbed high above the home defence to meet Lindsay corners but each time his header was just off target.

After 34 minutes Lyttle’s team did get the ball in the net but Lindsay's effort was ruled out for offside.

Five minutes later Finland took the lead against the run of play. Jimi Tauriainen produced a low cross from the left which was met by the onrushing Antii Kujala and he powered a fierce drive into the corner of the net, giving McDowell no chance.

After the break Northern Ireland continued to attack but numerous chances were squandered.

The lively Lindsay was brought down inside the box and the Northern Ireland skipper got up to take the penalty kick himself but saw his shot brilliantly turned away by Finland keeper Santeru Kotila.

Just when it looked as if all the pressure would come to nothing Northern Ireland drew level with six minutes remaining. Lewis Wood glided past a defender and his cross from the left was met by substitute Cameron Crook who sent a header looping over Kotila into the top corner.

There was still time for Northern Ireland to snatch the victory that their performance would have deserved and twice Crook came agonisingly close to getting a winner. Firstly, he produced a powerful header which went inches past the post and then his rasping drive from the edge of the box was pushed round the post by Kotila.

The teams meet again tomorrow (Thursday 19 September) atEerikkilaas the U16 Schoolboys continue their preparations for the defence of the Victory Shield in Wales at the end of next month.