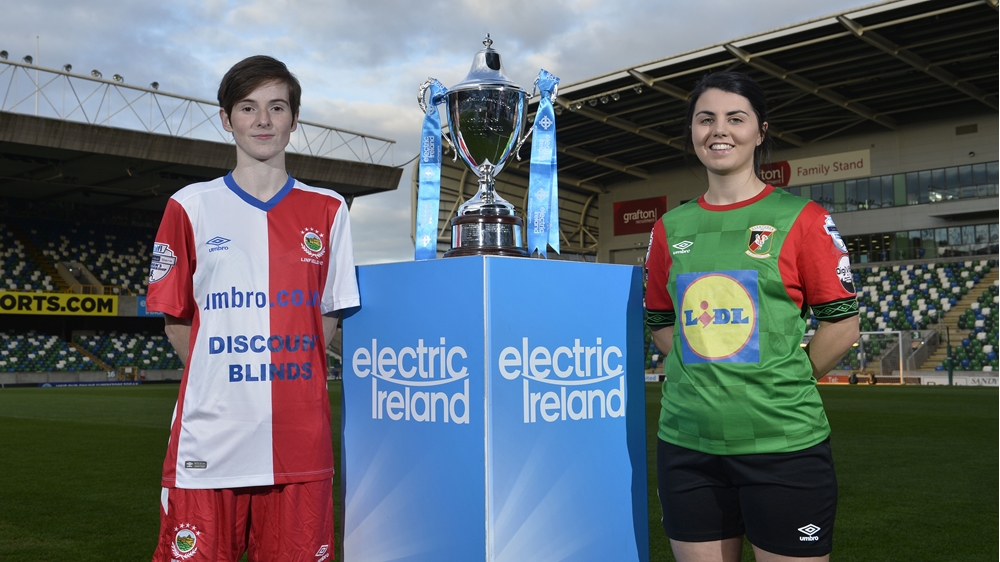 Far more than a traditional rivalry will be played out when Glentoran Women and Linfield Ladies meet at the National Football Stadium at Windsor Park tonight (21 September).

Cup holders Glentoran Women will not only be keen to retain the trophy but also to add to a haul which has already included the League Cup and County Antrim Cup this season.

Linfield Ladies, meanwhile, are still in with a shout of a league and cup double after hammering Comber Rec Ladies 18-0 on Wednesday night.

Captain Kirsty McGuinness took her tally for the season to 27 with four goals on the night, while younger sister Caitlin helped herself to a magnificent seven against the bottom of the table side in the Danske Bank Women’s Premiership.

The Blues must now defeat Derry City by seven goals or more next week in Derry-Londonderry to lift the title ahead of Sion Swifts Ladies, who are three points clear at the top but have no games left to play.

Another incentive for the Blues is that they will want to exorcise the ghosts of last season – and exact revenge. They were leading 1-0 against the Glens in the 2018 decider but ultimately lost out when Makyla Mulholland netted a late brace to deny them a domestic treble.

In their league meetings this season there has been little to choose between the two finalists. They have won one apiece and drawn the other one.

The McGuinness sisters, Kirsty and Caitlin, have scored well over 40 goals between them for the Blues and the Glens will no doubt be aware of their firepower. And fellow striker Rebecca McKenna has also been among the goals.

Glentoran Women manager Billy Clarke says his side will be up for the cup, however. He pointed out: “With our cup final record this season our players are absolutely buzzing and can’t wait for the match.”

The Glens also have plenty of firepower. Striker Rachel Rogan has already netted 16 times for her club this term.

Linfield Ladies head coach Phil Lewis is also in upbeat mood ahead of the final. He said: “I know my players will relish the challenge of facing Glentoran at Windsor Park in front of a big crowd. These matches are why we are in the game.”

A ticket office will be based at the media accreditation desk (open from 6.30pm) in the National Football Stadium’s South Stand (close to Boucher Road entrance) this evening. Ticket prices are £5 adults and £3 concessions.