Goals from Halstenberg and Gnabry spell defeat for Northern Ireland 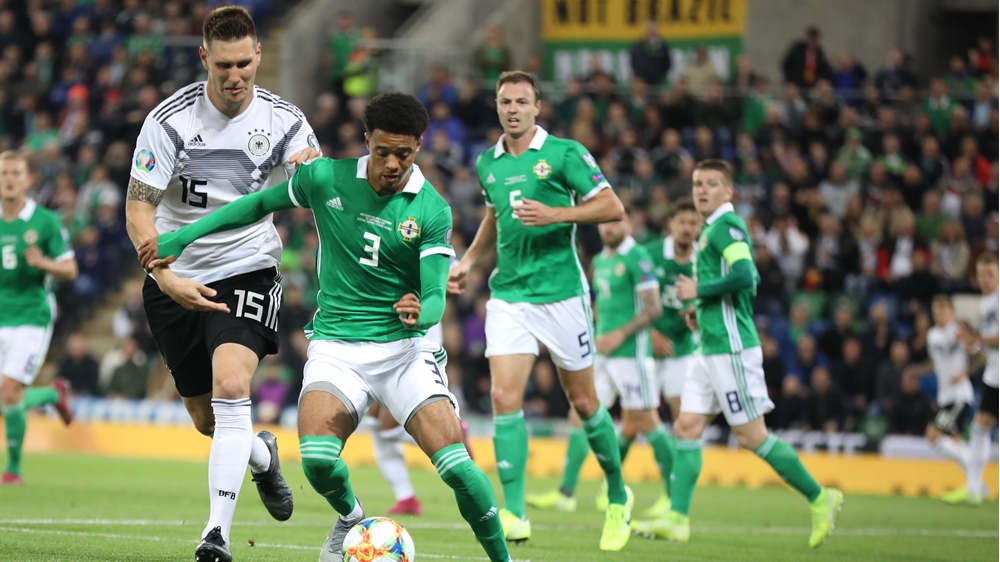 Goals from Marcel Halstenberg and Serge Gnabry saw a brave and spirited Northern Ireland go down 2-0 to Germany in the UEFA Euro 2020 Group C qualifier in Belfast.

Halstenberg's brilliant half-volley strike, which was netted early in the second half, combined with Gnabry’s intelligent late finish was enough for Joachim Low’s side to see off a courageous display from the hosts.

Northern Ireland created a string of gilt-edged chances at the National Football Stadium at Windsor Park and will look back on three Conor Washington opportunities and one from Stuart Dallas and ponder on what might have been.

Boss Michael O’Neill rang the changes from the Luxembourg friendly and named a strong starting eleven. Back came defensive stalwarts Jonny Evans and Craig Cathcart to the heart of the defence and the boss also solidified his central midfield with starts for the captain Steven Davis and Paddy McNair.

And it was the home side who created the game's first real opening when Washington bore down on goal, only for Manuel Neuer to show his class and block his effort.

Twenty-two minutes in, Germany had claims for a penalty waved away by referee Daniel Orsato when the ball struck Jonny Evans on the arm after Julian Brandt had let fly with a fierce shot inside the box.

The  Italian referee said no to another spot-kick appeal for Low’s side four minutes later when Timo Werner’s shot appeared to hit Craig Cathcart’s hand.

Striker Washington had his second big opportunity of the night after 35 minutes but he just couldn’t get on the end of McNair’s cross.

With just minutes to go before the break the Hearts frontman again agonisingly failed to connect with Stuart Dallas’ cross from the right, allowing Neuer to collect.

Early in the second session the Germans broke the deadlock when Halstenberg's left-footed strike found the top corner after Brandt had flicked on.

Another flowing move from the visitors ended with Brandt hitting the side-netting before Bailey Peacock-Farrell, who was superb in goal for the hosts, pulled off a magnificent save to deny Timo Werner.

The Burnley stopper was called upon again a few moments later when he produced another fantastic stop to keep out Marco Reus’ free-kick from 25 yards.

Just before the hour mark Northern Ireland had a penalty appeal of their own waved away when Paddy McNair appeared to be clipped by Tony Kroos but nothing was given.

Minutes later sub Gavin Whyte’s blistering pace was there for all to see as he blazed down the right and pulled the ball back for Dallas only for the Leeds United man to steer his shot wide of the mark.

O’Neill brought on fresh legs in the form of Shayne Lavery but the composed and experienced Germans contained the Linfield frontman.

As Northern Ireland committed men forward in pursuit of an equaliser the visitors hit them on the break and Kai Havertz’s slide rule pass set up Gnabry who darted in front of Cathcart to slip the ball into the bottom corner for his ninth goal in 10 appearances for Die Mannschaft. 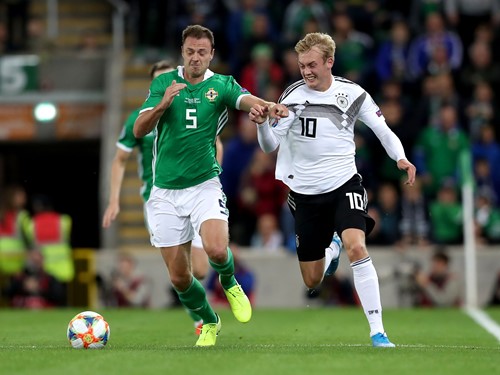 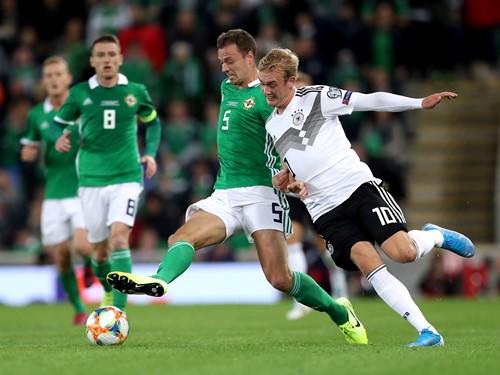 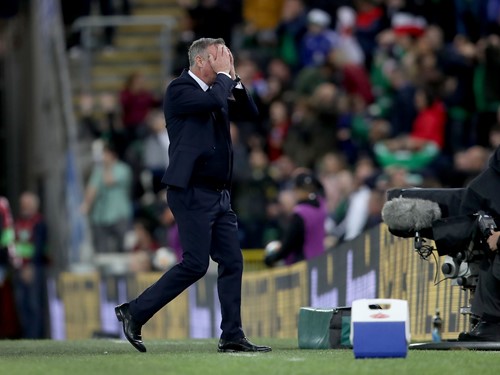 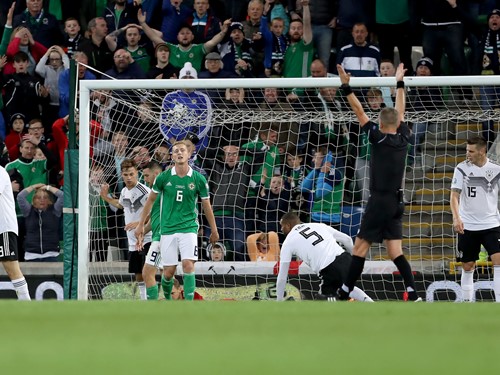 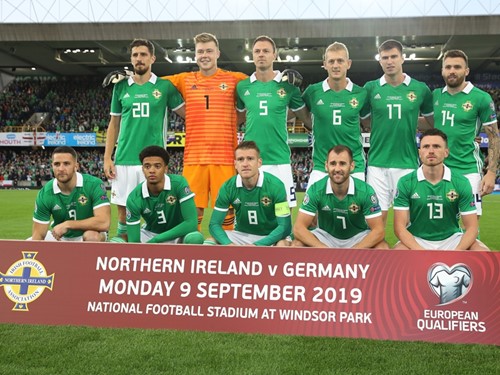 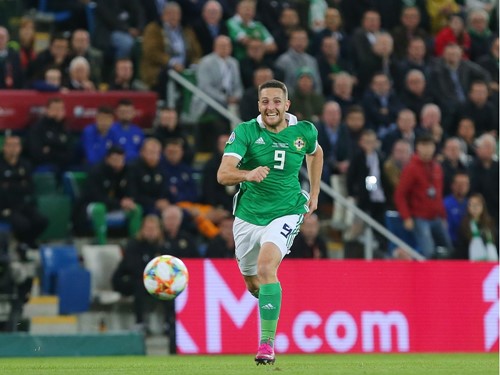 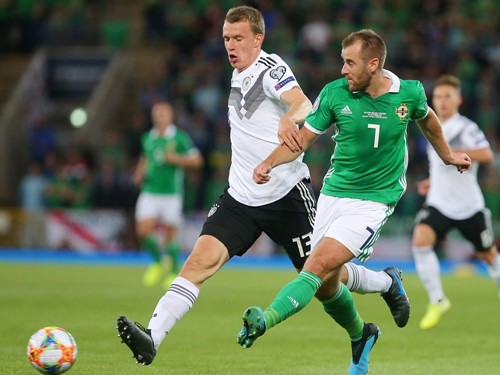 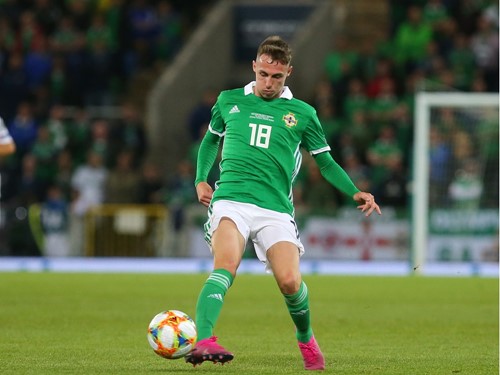 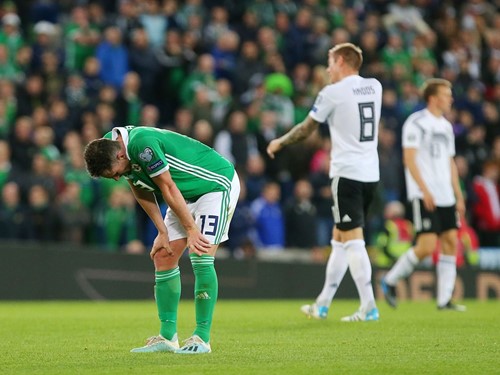