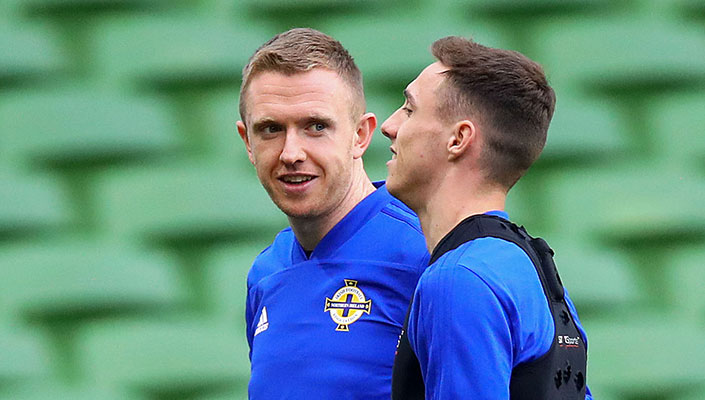 Winger Shane Ferguson is confident that Millwall can claim all three points against Stoke City this weekend as they bid to secure their Championship status for next season.

The Lion’s, who play host to The Potters in their penultimate home game of the season, know four points from their final three games will ensure Championship football for the South-London club next term.

“We still have a lot of confidence, and there is a lot of spirit in the dressing room,” Ferguson told the official club website.

“Playing against a side like Stoke, we know it will be difficult as well – but when The Den’s sold out, it’s always a tough place to come.

“It’s definitely a game we’re all looking forward to. The three points are what we’re focusing towards, and other results will take care of themselves.”

At the other end of the table, Jamal Lewis’ Norwich City require just a solitary point at home to Blackburn Rovers to confirm Premier League football at Carrow Road next season.

Lewis, who was named in the PFA Championship Team of the Season this week, has seen the Canaries struggle to get over the line having drawn each of their last four outings.

Ollie Norwood, who was also named in the PFA Championship Team of the Season, could be on the brink of joining Lewis and Michael McGovern in the top flight next term if Sheffield United can take all three points off already relegated Ipswich Town at Bramall Lane.

Unfortunately for Leeds United fans, it looks as if they will have to be content with a play-off place after back-to-back defeats has left them in third spot three points behind the Blades.

Stuart Dallas is expected to start for United on Sunday as they entertain in-form Aston Villa who have won their last ten outings on the bounce in the Championship.

Paddy McNair and George Saville look set to continue in the Middlesbrough team who face struggling Reading at the Riverside, victory is essential though if they are to maintain any realistic hope of a place in the Play-off’s next month.

Meanwhile in League One, the big ‘match of the day’ is Sunderland versus Portsmouth, third against fourth, at the Stadium of Light, a repeat of last month’s League Trophy final which the south-coast club won on penalties at Wembley.

Striker Will Grigg, who has been a substitute for the Black Cats in the last two matches, could be in line for a recall, though defender Tom Flanagan is expected to remain on the bench for Jack Ross’ outfit, who, if they win, would keep their hopes of automatic promotion back to the Championship very much alive.

Elsewhere, Accrington Stanley will avoid the drop into League Two if they beat Plymouth Argyle at the Crown Ground on Saturday.

Former Linfield player Paul Smyth, who scored against Doncaster Rovers in midweek, looks likely to keep his place in the Stanley starting eleven alongside Billy Kee who has now gone seven matches without finding the net.

Burton Albion play League One leaders Luton Town at the Pirelli Stadium, but top scorer Liam Boyce will be absent after being stretchered off with an ankle injury on Easter Monday in the defeat at Southend United.

In the Premier League Craig Cathcart, who was substituted at half-time in the 1-1 draw with Southampton on Tuesday, will be hoping to be in the side that take on Wolves at Vicaragre Road in a repeat of the FA Cup semi-final earlier this month.

Fellow defender Jonny Evans will continue in the heart of the Leicester City defence as the Foxes face Arsenal at the King Power Stadium in the lunchtime kick-off on Sunday.

Finally, Bobby Burns and Michael Smith will look to cement their place in the Hearts team for next month’s Scottish Cup Final with further good performances as they travel the short distance across Edinburgh to play old rivals Hibernian at Easter Road.