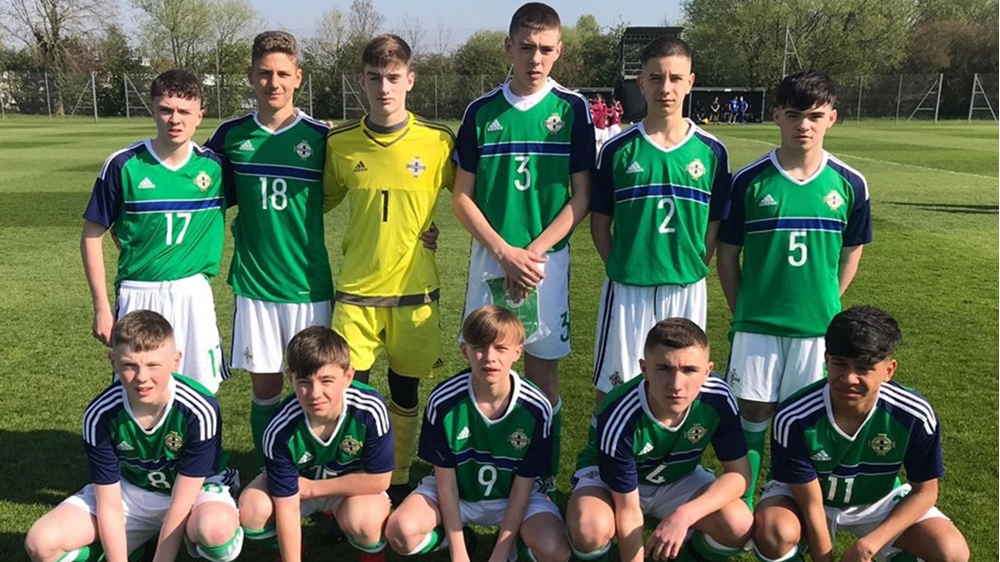 The Under-14 team from the Irish FA’s elite development programme notched up three fine victories in their five games in the tournament staged at West Ham’s academy in Romford. They also had a draw and suffered one defeat. They scored 12 goals overall, with striker Ethan Sousa averaging a goal per game.

The JD Club NI boys faced eventual tournament winners West Ham United in their opening game in London – and they drew 2-2. And they were the only side to take points off West Ham at the event.

West Ham, who were the better side overall, raced into a two-goal lead, however Michael McClean’s team showed great resilience to pull it back to 2-2 thanks to goals from the impressive Jamie Donley and Kenny Ximenes. And in the closing stages they actually missed a couple of decent chances to win the game.

Game two saw the Northern Ireland boys come up against Swedish outfit IFK Stocksund. The boys in green and white largely controlled the game, with Padraig McVicker looking particularly sharp, and ran out 2-1 winners. Ximenes was on target once again, while Ethan Sousa scored the other goal.

Their only defeat came against Cardiff City’s U14 academy side in game three. It was a flat performance and they lost out by a single goal. They did create chances during the match but their finishing let them down. JD Club NI’s best performer in the game was defender Ruairi McConville.

On day two they bounced back in style. Man of the match Ethan Sousa helped himself to a hat-trick as they swept aside Total Soccer Cayman (Cayman Islands). JD Club NI could have reached double figures against a poor side but had to settle for 4-0. McVicker was the other scorer.

McClean’s side kept their best until last. They produced their top performance of the tournament against Danish side Fremad Amager, winning 4-1.

The Northern Ireland boys went 1-0 up but then a mistake by goalkeeper Rian Brown let the Danes back into it before the break. In the second half though it was all JD Club NI. They dominated possession and netted another three goals without reply. The scorers were Luca Doherty, Ximenes, Conor Cunningham and Sousa, while Mitchell Watterson was man of the match. The result meant they finished fifth overall.