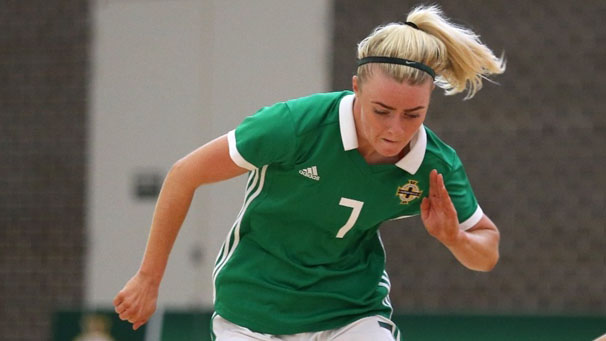 Keith Gibson’s side played two games away to Gibraltar – and they won both.

In match one at the Tercentenary Centre the Northern Ireland team scored after just two minutes and went on to win 3-0. And in game two at the same venue they came from behind to secure a 3-2 victory.

Winger Beth McKay was the early scorer for Gibson’s side in the first game. And forward Amber Dempster grabbed the second with nine minutes gone. Northern Ireland led 2-0 at half-time.

In the second period the game was pretty even, however Dempster pounced again to seal the win.

Gibraltar flew out of the blocks in the second game at the Tercentenary Centre and broke the deadlock after 11 minutes. And they increased their lead four minutes before the end of the first half.

Gibson’s side staged a thrilling comeback in the final seven minutes of the game as Gibraltar began to tire. The comeback was triggered by a goal from winger Hannah Firth.

With three minutes to go Northern Ireland were back on level terms, Olivia Brown netting with a low drive.

And Brown proved to be the hero in the very last minute when she popped up to sweep home the winner.