Northern Ireland Under-21s manager John Schofield has included several new faces in his squad for the upcoming away matches against Slovakia and France.

Most of the newcomers have stepped up from the U19s, although Rangers midfielder Charlie McCann is completely new to the Northern Ireland set-up after switching his allegiance from the Republic of Ireland. 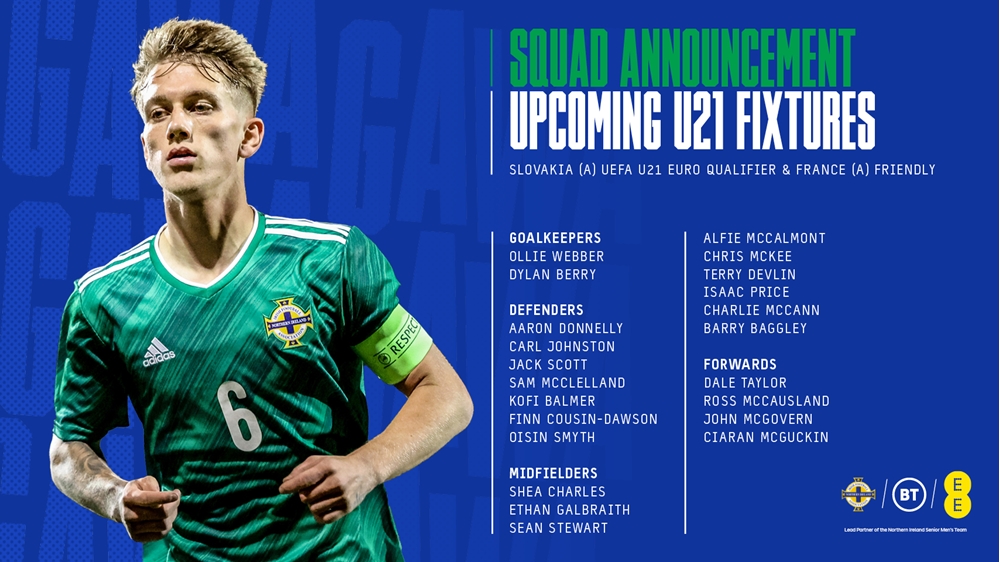 And also moving up from the U19s is Norwich City goalkeeper Dylan Berry, who is a key part of the U23s squad at Carrow Road.

Schofield’s 22-strong squad shows several changes to the panel chosen to play Lithuania and Malta in Euro qualifiers back in November.

Three of those players – Middlesbrough midfielder Caolan Boyd-Munce, Sunderland right back Trai Hume and Fleetwood Town winger Paddy Lane – have just been called up to the senior panel for the first time, for friendlies against Luxembourg and Hungary.

And returning to the U21s fold are Chelsea defender Sam McClelland, Nottingham Forest striker Dale Taylor and Linfield striker/attacking midfielder Chris McKee, who is currently on loan from Rangers.

Missing out this time through injury are Liverpool goalkeeper Liam Hughes and Ards striker Calvin McCurry.

And then they are off to Calais for a friendly against France’s U21s. That game is set to take place at the Stade de l'Épopée on Monday 28 March (7.45pm kick-off, UK time).

Northern Ireland U21s were due to play Russia at home in a Group C qualifier on 29 March, however that game was cancelled after the Irish FA announced Northern Ireland teams, both international teams or those affiliated to the association at club level, will not be playing Russian teams for the foreseeable future due to Russia’s invasion of Ukraine.

John Schofield’s side will be aiming to do the double over the Slovakians at Stadion MSK Zilina next week after defeating them 1-0 at Mourneview Park back in September. A penalty from captain Ethan Galbraith was enough for the U21s to take all three points in a rugged encounter in Lurgan.

Slovakia are currently third in the six-team group with nine points from six games (three wins, three defeats), while Northern Ireland are fifth on six points (two wins, four defeats). A win for Northern Ireland could propel them up to third behind leaders Spain and second-placed Russia, who are suspended until further notice.

The Northern Ireland U21 squad for the Euro qualifier against Slovakia and friendly against France is as follows: