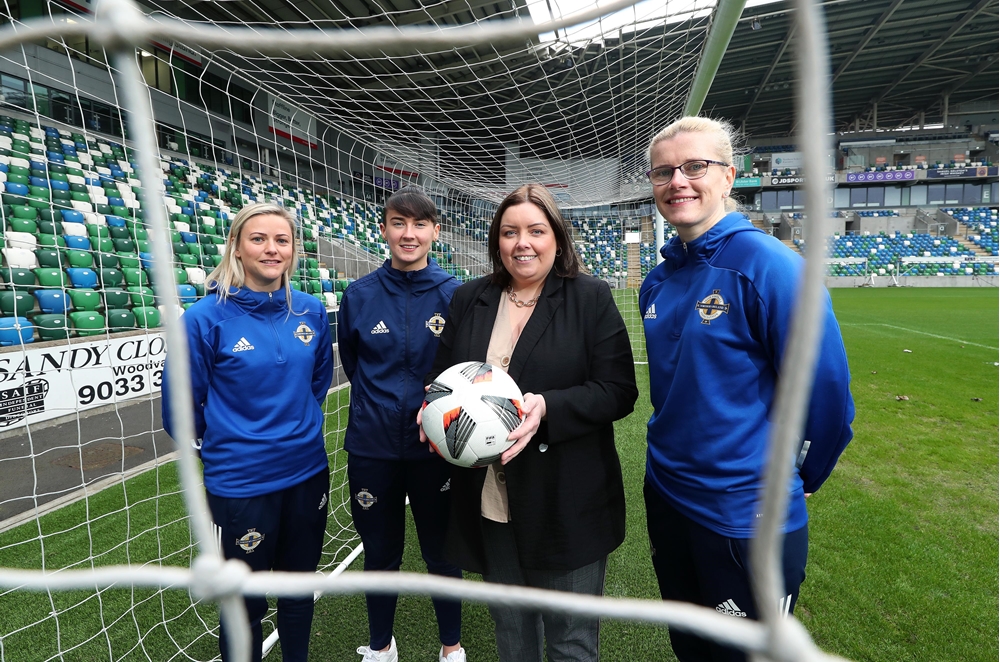 Communities Minister Deirdre Hargey has announced funding of £100,000 for the Irish Football Association to help promote female sport through football.

The announcement was made ahead of the Northern Ireland senior women’s team playing at their first major tournament - the European Championship finals - in England this summer.

After meeting with players from the team, the Minister said: “I am delighted that on International Women’s Day I can announce financial support for women’s football.

“This will help to ensure that initiatives are undertaken that will encourage young girls, the disabled and those from socially deprived areas to get involved in sport.

“The initiatives will provide access to players, coaching sessions and to games, all of which are recognised as important when it comes to encouraging those from under-represented groups to get active and to take up a sport, regardless of their ability.”

The Minister said she was keen to ensure there is a lasting legacy from the Northern Ireland senior women’s team’s “fantastic achievement” in reaching UEFA Women’s Euro 2022 and competing against the best teams in Europe in England in July.

“Maximising exposure of women’s sport and the players, who are role models to our young girls, will help promote participation in the years to come,” she added.

Angela Platt, Director of Women’s Football at the Irish FA, said: “On behalf of the association, and every young girl, and boy, dreaming of pulling on that famous green jersey, I would like to thank the Minister for Communities, Deirdre Hargey, and the Department for Communities for their support.

“We have an important job in encouraging more women and girls into participating in football, at all levels, right across the country. This funding will help us amplify this by widening out our ambassador programme of players visiting schools, clubs, grassroots and community settings, increase our fan engagement levels, plus further building our capacity of volunteers to support the delivery of programmes for girls’ and women’s football.

DfC said the funding provided highlights the importance of recognising the progress that has been made in women’s sport and how success can act as a catalyst and be used to create greater opportunities for women and girls to get involved in football or other sports.