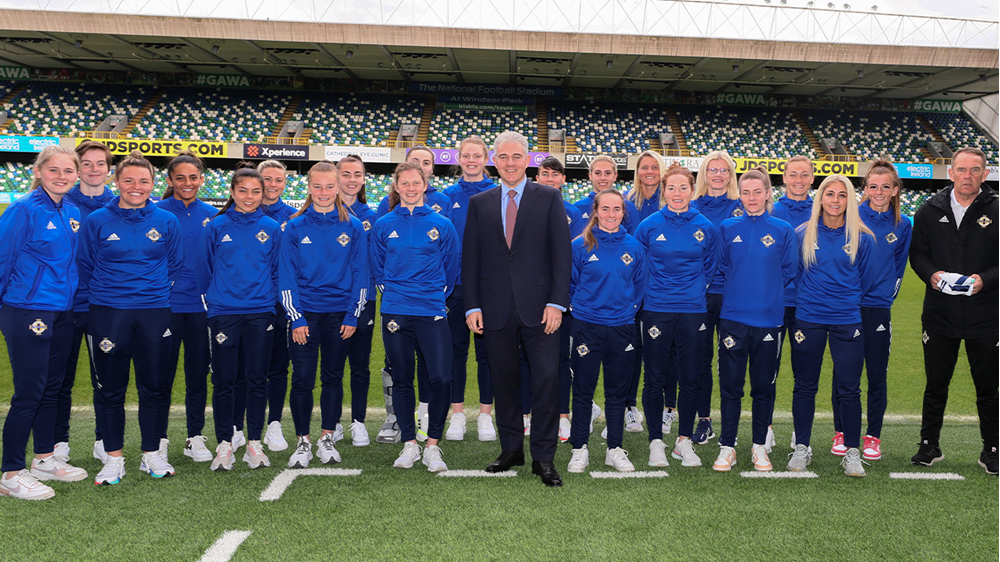 The Secretary of State for Northern Ireland, Brandon Lewis, has met with members of the Northern Ireland senior women’s squad to discuss their achievements on and off the pitch.

During a visit to the National Football Stadium at Windsor Park – it was staged to mark International Women’s Day – he was also introduced to senior women’s team manager Kenny Shiels, Irish FA President Conrad Kirkwood and Angela Platt, the Irish FA’s Director of Women’s Football.

The Secretary of State spoke with the players about their successes on the pitch and how they were adapting to a full-time training programme in the run-up to UEFA Women’s Euro 2022 this summer.

He also said he was looking forward to England visiting the stadium on 12 April for a FIFA Women’s World Cup 2023 qualifier.

He noted more than 10,000 tickets had already been sold for the game, which he said was “fantastic”, adding that the match would help to raise the profile of Belfast as well as women’s sport.

Mr Lewis said the senior women’s team had done excellent work not just to qualify for the Women’s Euros but also to raise the profile of women’s football and women’s sport in Northern Ireland by getting out in the community to encourage participation in sport.

The Secretary of State pointed out there was a lot more work to be done when it comes to supporting the development of women’s sport in general.

He said the success of the Northern Ireland senior women’s team would help to encourage more women to take up sport and attract more support for women’s sport.

Northern Ireland captain Marissa Callaghan welcomed the support from the Secretary of State.

She said he was “really interested” in how the Northern Ireland-based players in the squad were adapting to a full-time training programme and building momentum towards Women’s World Cup qualifiers against Austria and England next month and the Women’s Euros in England in July.

Kenny Shiels said Mr Lewis had been “very supportive of what we do”.