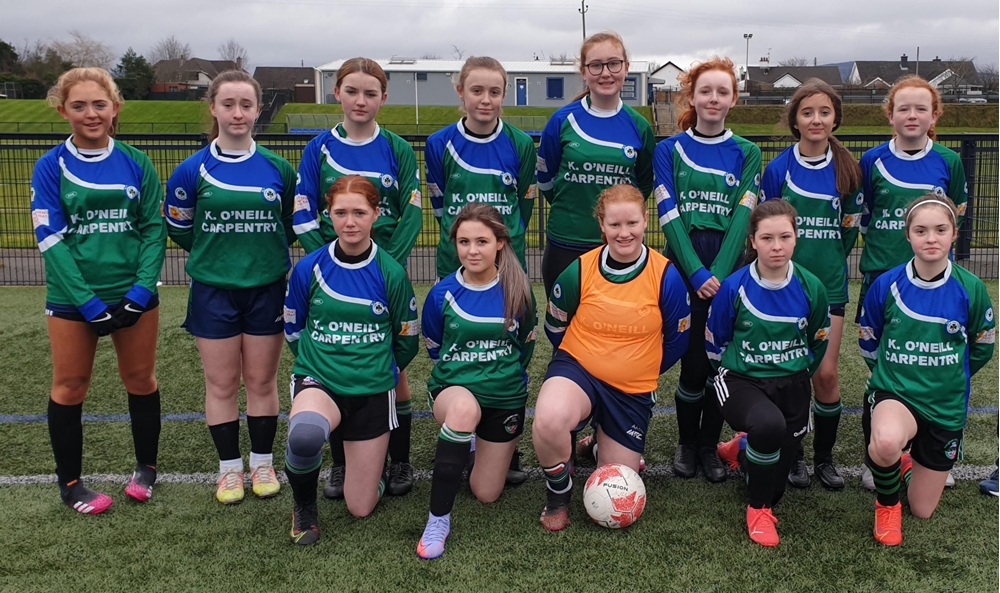 The opening rounds in this year’s Electric Ireland Schools’ Cup competitions for junior and senior girls’ teams provided some highly entertaining matches – plus a major shock.

The big shock came in the first round of the junior competition when St Cecilia’s College from Derry-Londonderry, who have good pedigree in schools’ football, were defeated by a team competing in the cup for the first time – St Patrick’s College from Dungiven.

It was billed as the tie of the round and the clash between the two Co Londonderry schools certainly lived up to its billing. It was a thrilling contest that ended 4-4 and went to a penalty shootout where St Patrick’s came out on top 4-3.

The game was played in the right spirit. Afterwards St Patrick’s coach Conor Lavery said: “We have nothing but high praise and thanks for the team and management from St Cecilia's College. Their girls were excellent and played some first class football during a very exciting end to end game that was played in a very sporting and competitive manner.” St Patrick’s now go on to play Ballymoney High in the second round.

Ballymoney also progressed on penalties after an entertaining tie against Belfast Girls’ Model at Ballymena Showgrounds. The game ended 1-1, however Ballymoney progressed via the shootout.

St Patrick’s and Ballymoney will face each other later this week in Dungiven with a place in the quarter-finals up for grabs.

Other notable results in round one included Our Lady and St Patrick’s Knock defeating east Belfast rivals Bloomfield Collegiate 5-4. It was a game in which Bloomfield led 2-0 and 4-2 before OLSPK eventually outscored them.

Antrim’s Parkhall Integrated College and Lisburn’s Laurelhill Community College produced a fantastic game in Crumlin. There were plenty of goals and goalmouth action as the encounter finished 5-3 in Parkhall’s favour.

In the senior competition the tie of the round came at Ballysillan with north Belfast rivals Mercy College and Dominican College delivering plenty of goals for the spectators.

Mercy raced into the lead but Dominican College could not be put away and came back into the game.

However, ultimately Mercy were able to see the game out 6-3 but the Dominican team left with their heads held high having battled all the way to the final whistle.

Omagh Academy and Our Lady and St Patrick’s Knock were the other winners in the first round and now move on to the quarter-finals.

Image: The team from St Patrick’s College in Dungiven who pulled off a shock win in round one of the Electric Ireland Junior Schools’ Cup.