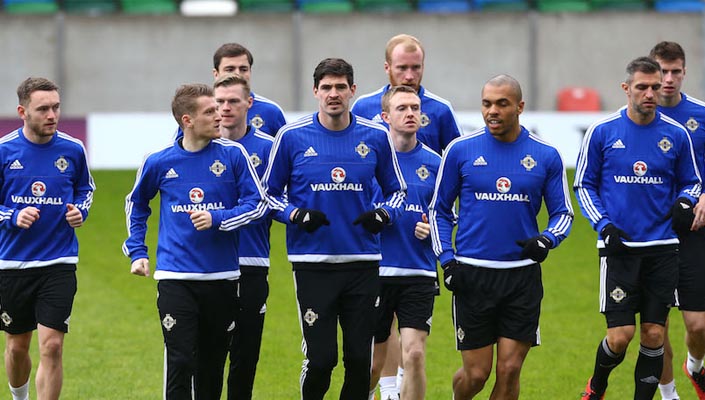 Northern Ireland are looking to go ten unbeaten when they take on Slovenia in Belfast on Monday evening.

Michael O’Neill’s men will be hoping to continue a great run of form and also claim their 150th win in International Football when they take to the pitch at the National Football Stadium at Windsor Park.

O'Neill played with both 5-3-2 and 4-3-3 formations during the 1-1 draw with Wales mid-week, and the game on Monday night will present another opportunity for the manager to experiment with his team.

It will be exactly seven years on Monday night since Jonny Evans scored his one and only goal for his country in the 3-2 win over Poland at the National Football Stadium at Windsor Park.

It is at the other end of the pitch where he has excelled recently with the team having conceded just eight goals in their last ten internationals, keeping two clean sheets.

O’Neill’s side have not conceded more than one goal in a match since losing 2-0 to Romania in 2014. Slovenia, who lost out to Ukraine in the play-offs for Euro 2016, defeated Macedonia 1-0 in a friendly on Wednesday thanks to a goal from Roman Bezjak.

The Slovenians have never managed to score on their two previous visits to Belfast, with the teams playing out a goalless draw the last time they met in back in 2011 for a Euro2012 qualifier.

Northern Ireland will have to keep a close eye on striker Milivoje Novakovic who has 31 international goals to his name in 73 games, just four short of the all-time record.

It will be a tough test for the team in front of a home crowd, but there is no doubt the players will be aiming to continue their record breaking form.