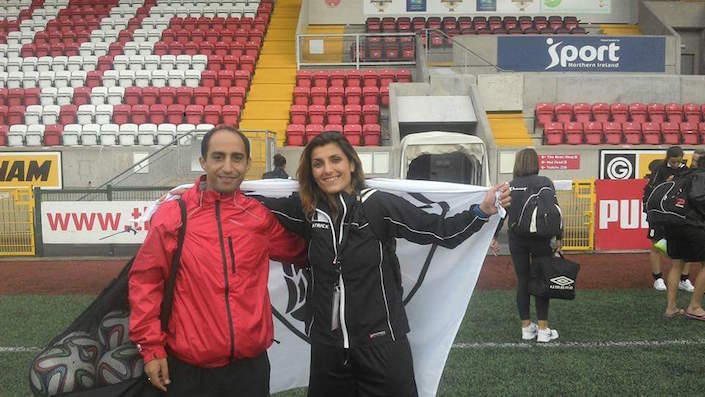 This month the volunteer focus spotlight shines on Aziz Chamami who is a member of the IFA Volunteer Team and has been involved within various volunteer roles at the Irish FA.

Without the thousands of football volunteers, giving up their time and energy every week, football as we know it wouldn’t exist. The Irish FA have recently established an Official IFA Volunteer Team to encourage volunteering within different areas of the Irish FA and provide exciting opportunities for many committed and enthusiastic individuals. Opportunities have been established within various strands of the local game including Grassroots, Disability, Women’s and Schools football. Each month www.irishfa.com will be speaking to a current member of the IFA Volunteer Team, taking a snapshot of their volunteering experiences within the Irish FA.

This month the volunteer focus spotlight shines on Aziz Chamami who is a member of the Irish FA Volunteer Team and has been involved within various volunteer roles at the Irish FA.

How did you get involved within the volunteer team?

After finishing my UEFA B Licence I wanted to get involved with the Irish FA as a volunteer. I was on the website and I saw the volunteer opportunities that excited me so I downloaded an application form. I was invited in for a volunteer induction and it just snowballed from there.

I had always wanted to be a coach but I was really inspired whilst doing my coaching badges. The way the tutors represented the Irish FA made me really want learn more and help out in some capacity. I also watched volunteers coach my 8 year old daughter and it really encouraged me. Seeing them give up their time, helping young people learn the game and giving something back to the community was something positive that I wanted to get involved in.

I have been involved within a number of roles at the Irish FA.  I have volunteered within the pre-match fans zone at international games as well as being an Irish FA Match Monitor. The Match Monitor role involves attending youth football matches and monitoring the behaviours and standards displayed by players, spectators and club volunteers. This is a relatively new role and it’s great to help improve NI football in some small way.

Definitely! I got to meet some very special people (Michael O’Neill) who gave me some very valuable advice. Just being around specialist coaches allows me to learn a little every time and hopefully I can bring that back to my club volunteering.

I’ve also had some great opportunities that I would never have got without being a volunteer. An example was my role as a Team Liaison Officer within the Women’s Champions League Qualifying tournament in Belfast. I was involved with a Greek Team (PAOK) and had such a fantastic experience. I got to meet some great people and was able to learn from them in terms of how they conducted themselves and dealt with difficult situations.

That no matter how long you’ve been involved in football there’s always something to learn and discover. You can learn so many skills volunteering that can help you in all aspects of life. I have developed communication and negotiation skills and am a better person due to my volunteer experiences.

The best experience was actually a social get together with all the volunteers. We played an 11 a side game vs an Irish FA Staff select. It was just a really fun night and thankfully we got the result.

Another standout experience was the Club and Volunteer Recognition Dinner in March 2016. Michael O’Neill was the special guest and it was great to meet him and be recognised alongside the Irish FA Volunteer Team for all our efforts over the last year.

In one sentence, why should people volunteer within the Irish FA volunteer team?