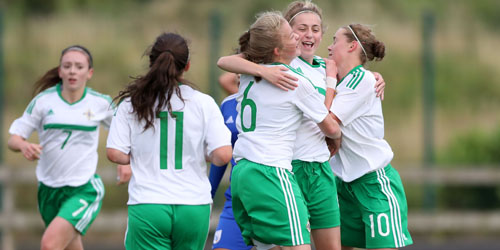 Northern Ireland's Under-19 Women began their two international challenge matches against Cyprus with a 4-0 win at the Riada Stadium in Ballymoney.

Northern Ireland dominated the early proceedings and it wasn’t long until they went in front with Rebecca Bassett breaking the deadlock in the 13th minute with a good finish just outside the box.

During a first half dominated by Northern Ireland they had several chances to extend their lead. Caitlin Hamilton, Rebecca Bassett and Abbie Magee all went close, however they were unable to extend the lead and went into the break one goal up.

The second half started in the same vein with Northern Ireland pressing high up in the Cyprus half. It wasn’t long until they doubled their lead through Caitlin Hamilton who timed her run to perfection to meet an in-swinging corner and head home.

As the half progressed Northern Ireland pushed to increase their lead and scored a third through a brilliant finish from Sarah Connolly from outside the box.

It was a game of great finishes and Northern Ireland’s fourth goal was another spectacular strike from Emma McMaster.