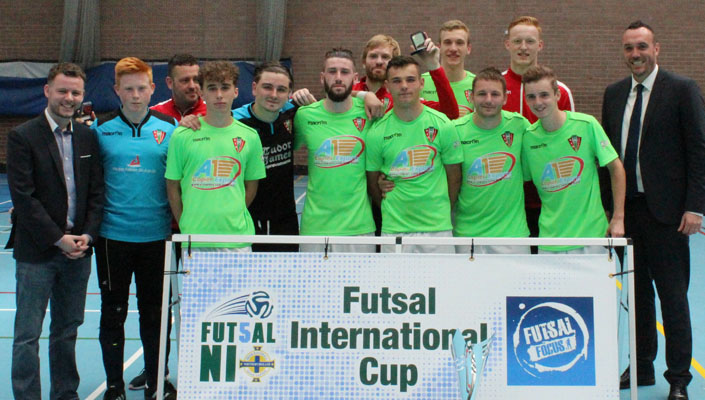 The Irish FA successfully delivered an action-packed weekend of futsal at the Lagan Valley LeisurePlex in partnership with Futsal Focus.

Wrexham Futsal Club (Wales), the University of Nottingham (England), Saints and Scholars (Republic of Ireland) and Foyle Futsal Club (Northern Ireland) competed in the first ever Futsal International Cup at the Lisburn venue on Saturday and Sunday.

All teams completed their round of matches on four points and as a result the final games were selected by goal difference.

The University of Nottingham and Saints and Scholars competed in the third/fourth place game with the Dublin-based club coming out on top.

Northern Ireland national futsal champions Foyle Futsal Club gave a fantastic account of themselves to make the final against Wrexham but were beaten by experienced and disciplined opponents. More than 15,000 viewed the final games via the Irish FA’s Facebook page.

Irish FA Schools and Futsal Manager Jonathan Michael said: “This weekend has been a positive next step for our development of futsal in Northern Ireland. The Futsal International Cup was introduced to provide our domestic champions with an opportunity to play against more experienced opposition and also raise the profile of domestic competition in this country.

Jonathan added: “The final element of the weekend was the coaching conference which was the first of its kind in Northern Ireland. We wanted to offer our coaches the opportunity to enhance their knowledge received from participating on Irish FA Futsal Coach Education courses by welcoming futsal experts from across Europe.

“I am pleased that the conference was such a success and we are committed to making this a more regular event. I would like to thank the coaches for accepting the invitation and hope we can continue to work together in the future.”

He also thanked Futsal Focus for their involvement in the weekend.

“They are extremely supportive of the development of futsal in Northern Ireland and it was our pleasure to work with them this weekend,” he said.