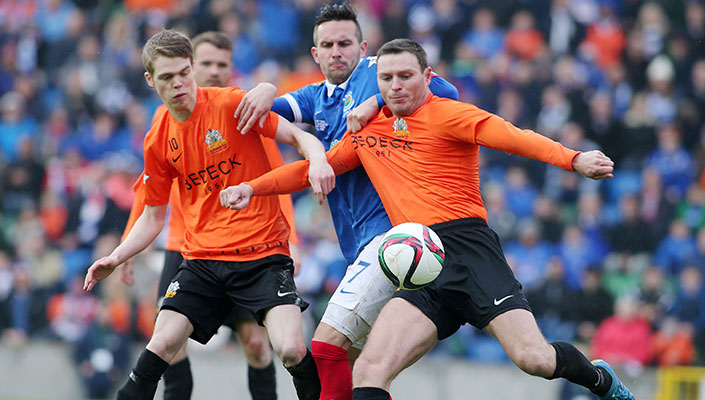 The agreement means BBC Northern Ireland will continue to broadcast Irish Premiership games including seasons 2016/17, through to 2019/20.

BBC Sport Northern Ireland will bring fans weekly action and up to the minute news from the Irish Premiership across TV, radio and online.

Every Saturday, the highlights of all the action will be available on Final Score on BBC One Northern Ireland and on Monday’s popular Irish League show which is available on the iPlayer and online at bbc.co.uk/sportni

In addition to highlights coverage, live radio commentary of games will continue on Sportsound on BBC Radio Ulster, as well as midweek fixtures, across all BBC Sport NI services including online, BBC iPlayer Radio and the BBC Sport app.

"After a great summer of football we are delighted to announce continued guaranteed coverage of all the domestic action across television, radio and online. We are looking forward to working with the IFA, NIFL, the clubs and their representatives over the next four years.

“Our reporters, commentators and guests are known for providing first class coverage, news and analysis of Northern Ireland football both at home and at international level and we are delighted to be able to bring this football package to the fans.”

The new deal also means BBC Sport NI continues as the host broadcaster for the Irish Cup and will show highlights of the Irish League Cup Final on the BBC iPlayer.

“With its comprehensive coverage across TV, radio, online and social media, BBC Sport NI is the perfect partner for the Tennent’s Irish Cup and Danske Bank Premiership.

"I am therefore extremely pleased that BBC Sport NI has made this new four-year commitment to football in Northern Ireland and I look forward to continuing to build our excellent partnership over the coming seasons.”

“This is fantastic news for the Northern Ireland Football League and for the many fans around the country and beyond who tune in every week to radio, online and TV coverage.

"The BBC have shown great faith in local football by investing in their infrastructure and technology at each Premiership ground, and we are delighted that they have extended their broadcasting agreement for another four years."