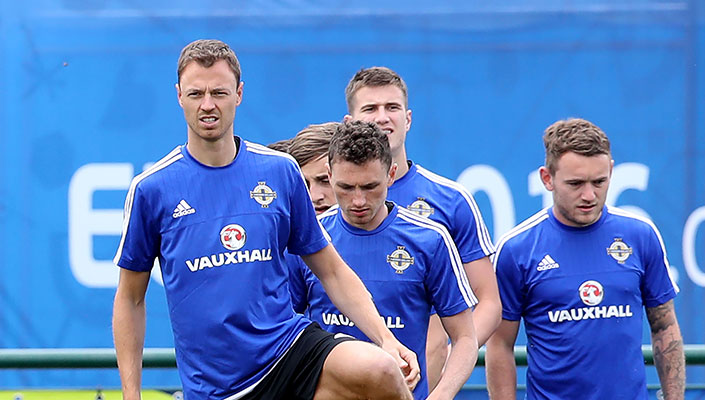 The Northern Ireland players are keen to bounce back to form against Ukraine, according to Jonny Evans.

The defender said the players were disappointed to lose to Poland in their Euro 2016 opener and want to “put things right” in Stade de Lyon on Thursday.

“We enjoyed it but were disappointed by the result. We have watched the video of that game and there are things we can improve on. The manager is determined to put things right. And as players we want to put it right,” he said.

“We didn’t do things in the game that we have done well in the past and that’s something we want to try to rectify.”

He admitted the team did not deal well enough with the Polish attack to keep a clean sheet and that was disappointing.

“I don’t think we were overwhelmed at all. I just thought the speed of the game caught us by surprise. We lost belief maybe in the things that we were good at,” he added.

However, the classy defender, who was arguably Northern Ireland’s man of the match on Sunday, said it was important to take positives from the game and not get disheartened by the 1-0 defeat to the Poles.

Jonny believes the team will do better by closing people down, being more physical and aggressive and by trying to stamp their authority on games.

He said the game against Ukraine later this week will be “another cup final”.

The centre back noted lots of teams had lost their first game but the format of the tournament means they still have a chance of qualifying for the knock-out stages of Euro 2016.

At a press conference in the Northern Ireland Media Centre at Parc de Montchervet, Jonny also reflected on his first ever game at a major tournament.

He revealed: “Bar the result, the whole build-up to it, the fact that it was in Nice, the sun was shining, everyone’s friends and family were there, everyone was getting together, the atmosphere the Northern Ireland and Poland fans created in Nice… that made it even more enjoyable for us.

“Knowing that your family were safe going to the game meant you could relax. What a place to have your opening game. The whole build-up to the game was just fantastic.”

Jonny also made special mention of Darren Rodgers, the 24-year-old Northern Ireland fan from Ballymena who died in a tragic accident in Nice in the early hours of yesterday morning.

“The game in Nice was one of the greatest experiences we have ever had as footballers and the fans played a huge part in that, so to wake up the next day to find one of them has passed away was very, very sad news,” he said.