Aaron Hughes 100 Not Out 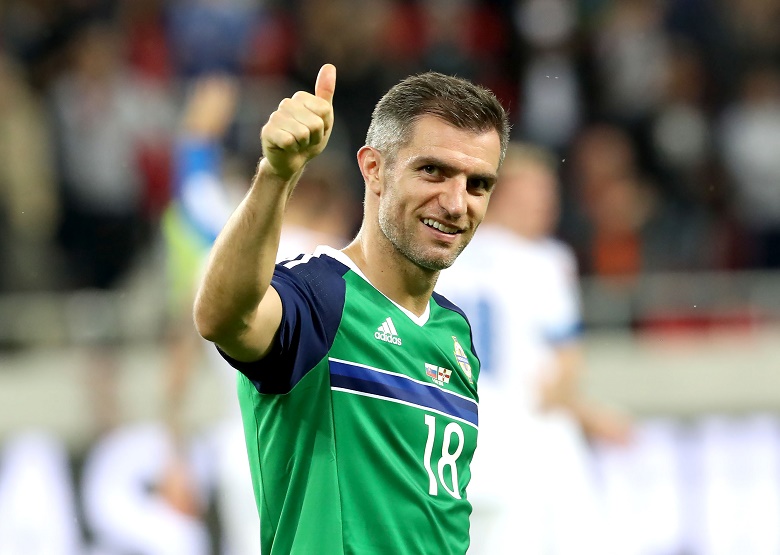 When Aaron Hughes came on for Craig Cathcart after half-an-hour of last night's scoreless draw in Trnava he became the first outfield player in Northern Ireland's history to win 100 caps.

And, fittingly, that landmark came against Slovakia, the very nation that provided the opposition when the amiable Cookstown man took his international bow way back in March 1998.

By that stage Hughes had worked his way through the youth ranks and since being capped by Lawrie McMenemy went on to captain the side on almost 50 occasions.

Speaking about his achievement, Hughes said: "It probably still hasn't sunk in because I'm still pretty excited about next week and what we're going to face there.

"That's the thing I've been looking forward to the most, this is like the icing on the cake and once it's all done and dusted and I look back afterwards that's when I might sit back and realise what's happened."

Team captain Steven Davis paid tribute to Hughes ahead of the Slovakia game: "Everybody looks up to Hughesy and can take a lot from him in terms of his application and the level of professionalism he shows and his consistency.

"I don't remember him ever having a bad game and that probably goes for everybody. He's a great example for all the players on the team."

And boss Michael O'Neill was equally glowing in his praise: "The four years I've had with Aaron have been positive. He's been a good player for me and is a very important member for the squad, a great example to all the young players but ultimately still a player that has an awful lot to offer.

"He trains well, looks after himself and if you're looking at your dugout and you're needing a player to go on the pitch at a certain moment in time, it's nice to have people like that to choose from."

Congratulations Aaron, here's to many more!