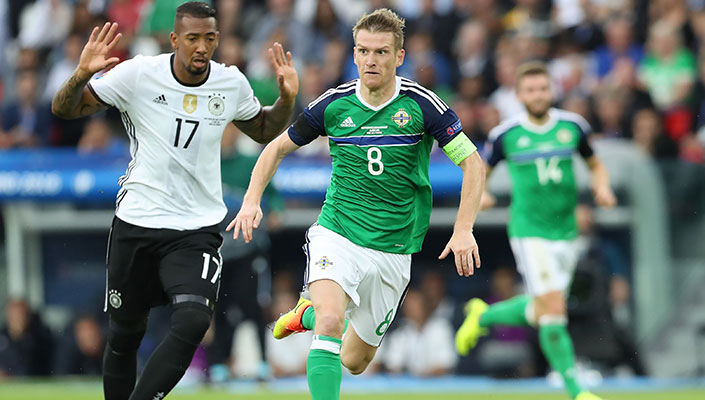 Northern Ireland captain Steven Davis believes if his side can play to their potential they can book their spot in the UEFA Euro2016 Quarter Finals.

Davis spoke to the media ahead of the UEFA Euro2016 round of 16 game against Wales on June 25 at the Parc des Princes in Paris.

Northern Ireland drew with Wales in Cardiff back in March and the captain is aware of the threats they possess, he said: "As you say, a lot of our players are familiar with their players, and likewise, having played against or with them. So there’s going to be an edge to the game. The biggest thing being what’s riding on the game, and it’s one that everybody is looking forward to.

"Of course everybody knows Gareth Bale is a special talent, and I think you only have to look at his contribution in terms of goals and assists in the last couple of years to see how important he is to the team. So he’s going to be one that we’re definitely going to have to try and stop.

"But they’ve got other threats as well. As much as we know about their strengths, we have to focus on ourselves and try and cause them some problems."

In previous games, Northern Ireland haven't had the majority of possession but Davis believes his side can go and show their attacking abilities on Saturday. He said: "I think we’ll have more possession than we have done in the previous games. I don’t think we’ll face a tougher test than we did here the other night against the Germans. So we’re looking forward, we’re familiar with the stadium.

"We know we can carry an attacking threat, again, set plays will be big for us, and it’s about going out and showing that. I think if we get to the levels that we are capable of, then we fully believe that we can get ourselves into the next round."