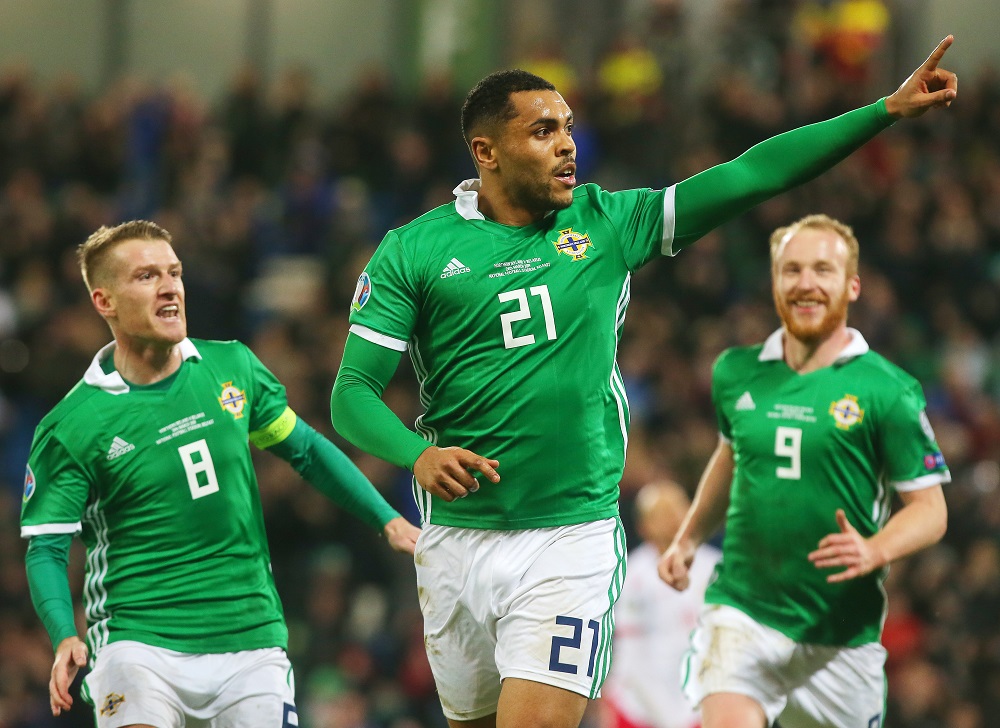 Northern Ireland maintained their perfect start to the Euro 2020 qualifiers with victory over Belarus at the National Football Stadium at Windsor Park.

Goals from Jonny Evans and Josh Magennis made it two wins from two for Michael O'Neill's side and places them at the top of Group C at this early stage in the campaign.

Northern Ireland dominated possession during the opening 20 minutes but, despite this, there was little goalmouth action of note.

However, the first proper opening of the game came soon after through Paddy McNair who did well to turn out on the right before testing Andrei Klimovich with a rising effort from the edge of the box.

It took a further few minutes after that for Belarus to threaten for the first time when Ivan Maevski and Stanislav Dragun combined to win a corner off Stuart Dallas, with the subsequent set piece punched clear by Bailey Peacock-Farrell.

At the other end Kyle Lafferty fizzed a low shot into the box which Kliomvich managed to turn around an upright.

And the deadlock was broken from the corner that followed after Steven Davis flicked the ball on for Evans to rise highest to nod a powerful header into the bottom corner.

But the lead proved to be short lived. Around two-and-a-half minutes later Belarus levelled through Igor Stasevich is somewhat fortunate circumstances when his 20-yard strike took a massive deflection off the unfortunate Dallas to go beyond the reach of Peacock-Farrell.

After taking a little time to regroup, Michael O'Neill's side attempted to regain the advantage with moments of promise from a Jordan Jones teasing run that caused problems for the visitors while Niall McGinn tried his luck from outside the box only to fire just over.

There was another chance early in the second, although it wouldn't have counted after the flag went up for offside, when Lafferty was thwarted by Klimovich from point blank range before played switched down the other end for Pavel Savitskiy to squander a volley.

Northern Ireland looked more likely to find a way through, continually knocking on the door. McNair saw a well struck effort blocked while Saville fired over the top with another shot deflected wide.

Then, later on, Lafferty failed to make the most of a Magennis ball into the area succeeding only in turning it over ... but still that elusive second goal just wouldn't come.

Eventually, though, the deserved breakthrough came.

With just three minutes left on the clock Magennis controlled a Craig Cathcart long ball forward, laid it off for Dallas who then found McNair before it was returned for the unmarked Magennis to turn home from inside the area.

Yet the game still wasn't won. Belarus responded positively through Pavel Nekhaychik's cross which McNair cleared just in time before, in the dying moments, Peacock-Farrell had to be at his absolute best to block a shot at the far post.