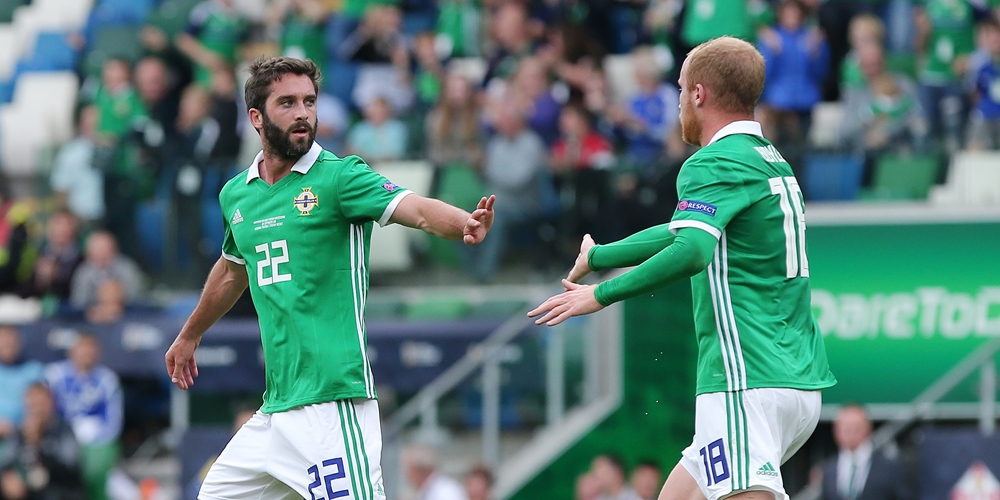 Will Grigg helped Sunderland keep their hopes of automatic promotion from League One alive after he hit a second-half winner against Walsall at the Stadium of Light at the weekend.

The Black Cats sealed a 2-1 victory in the 71st minute when the 27-year-old fired home his third goal since his £4 million move from Wigan Athletic.

Sunderland boss Jack Ross, whose side are now just two points behind second-placed Barnsley with a game in hand, believes that Grigg is finally settling into his new surroundings.

“With the exception of the last couple of tough away games, he has had chances in every game,” declared Ross, “he has found himself in those positions and if we keep doing that, then he will score goals.”

Elsewhere in the division, Liam Boyce ended his two month barren run without a goal by hitting his 11th of the season in Burton Albion’s comfortable 3-0 home success over Blackpool.

The former Cliftonville striker, who had been on the bench for the last couple of matches, also provided an assist for strike partner Luke Akins who scored Burton’s third goal.

“It was right for Liam Boyce to come back in today, having had a little rest,” said Brewers’ manager Nigel Clough after the game.

“Our strikers haven’t been scoring and making goals for each other. Today, they have both scored and made one for each other, which is a perfect partnership day.”

In Scotland, Niall McGinn made it two goals in a week - and six for the season - when he found the net with a sublime volley as Aberdeen were held to a 1-1 draw by Livingston at Pittodrie.

After the match a frustrated Davis said: “Listen, I think you know what other teams’ game-plan is going to be when they come here.

“We played into their hands, we have given them the early goal and that allows them to break up the game and not allow us to get any rhythm.

“We were all aiming to get a result regardless of performance,” he added. “It’s all about winning football matches here - that’s the be all and end all.”

Striker Kyle Lafferty was an unused substitute for Steven Gerard’s team on Saturday but winger Jordan Jones was omitted from the Kilmarnock squad for the trip to Ibrox.

“Jordan Jones was fit, but I picked the team with a certain way of playing in mind,” explained Killie boss Steve Clarke. “I couldn’t find a space on the bench for Jordan.”

In the FA Cup, Craig Cathcart helped Watford secure a semi-final place with a 2-1 victory over fellow Premier League outfit Crystal Palace to set up a last-four meeting with Wolves at Wembley next month.

However, there was huge disappointment for Shane Ferguson as Millwall squandered a two-goal lead to eventually go out to Brighton & Hove Albion 5-4 on penalties.

The Championship side were two up with just two minutes of normal time remaining, but Chris Hughton’s charges responded with goals from Jurgen Locadia and Solly March to force extra-time.

With a penalty shoot-out looming Ferguson was dismissed by referee Chris Kavanagh following a rash challenge on Brighton’s Shane Duffy.