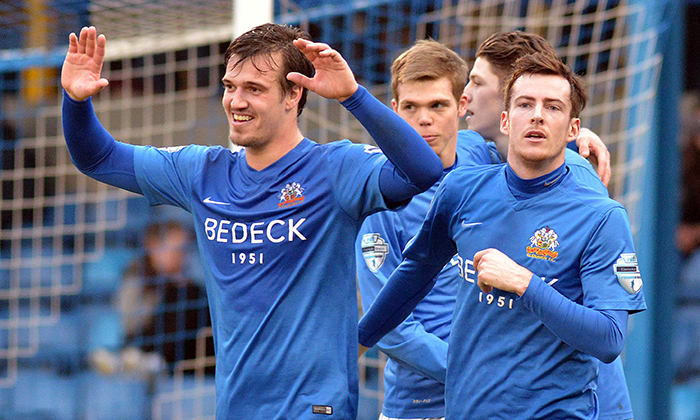 Cup football may have been devalued elsewhere but in Northern Ireland the Tennent’s Irish Cup still produces a healthy dose of interest, excitement and good old fashioned romance.

For many it continues to be a big day out and Saturday’s sixth round offers that in bucket loads with a generous sprinkling of potential upsets, derbies and old rivalries.

Holders Glenavon make the short trip to Armagh City for what could be a challenging enough battle for them at Holm Park.

City are struggling at the wrong end of the Championship but they will be smarting after a recent defeat to Warrenpoint Town in the Mid-Ulster Cup final - and with home advantage they’ll be out to make things difficult for Gary Hamilton’s side.

Staying in Mid-Ulster, there will be plenty of eyes turned towards Lakeview Park where Loughgall welcome Portadown.

The Villagers have been enjoying something of a revival of late under recently appointed boss Dean Smith and with Portadown currently rooted to the bottom of the Danske Bank Premiership this is one game with upset written all over it.

However, the Ports are now managed by former Loughgall boss Niall Currie who during his tenure at the club guided them to a series of league titles and cup success. While he will no doubt enjoy a return to his old stomping ground he’ll also be keen to leave with a quarter-final berth safely tucked away.

The leading pair in the Premiership – Crusaders and Linfield – face Championship opponents PSNI and Institute respectively, but don’t be fooled into thinking they will have it all their own way.

Indeed the Crues will have their Co Antrim Shield semi-final scare against the PSNI back in November fresh in their minds. Although they won 4-2 in the end, Stephen Baxter’s side had to rely on two late goals from David Cushley and Paul Heatley to spare their blushes.

And Linfield won’t find Institute any less difficult at the end of a long journey to Drumahoe.

Kevin Deery’s side have stumbled a little lately but with the recent acquisition of Sammy Morrow – a former Linfield striker no less – they will feel there’ll be no better occasion to get back on track.

Oran Kearney’s Coleraine will be looking to keep their recent winning streak going with victory over Tobermore United at The Showgrounds. The Bannsiders have won their last six games on the bounce, while United have lost their last four Premier Intermediate League games in a row without even managing to find the net.

Coleraine have climbed up to fourth in the Premiership, one step ahead of Ballymena United.

The Sky Blues, already contesting the League Cup final later this month, face Harland and Wolff Welders at Tillysburn Park in the tie of the round.

The tie evokes memories of that titanic quarter-final clash two years ago at the same venue when three late goals, including a 94th minute winner, saw United overturn a two-goal deficit – and the season before that the Shipyard men forced a replay only to lose narrowly in the return at The Showgrounds.

There are two non-NIFL clubs still left in the competition, Crewe United and Dollingstown, both from Mid-Ulster Intermediate A.

Dollingstown comfortably swept past Richhill in the last round and received their reward with a trip to Stangmore Park to face Rodney McAree’s Dungannon Swifts. Crewe, managed by former Northern Ireland international Peter Kennedy and conquerors of Knockbreda in round five, are up against Championship opposition again in the shape of league leaders and recently crowned Mid-Ulster Cup winners Warrenpoint. Both games could be tight affairs.