Winger on target for Leeds against Ipswich 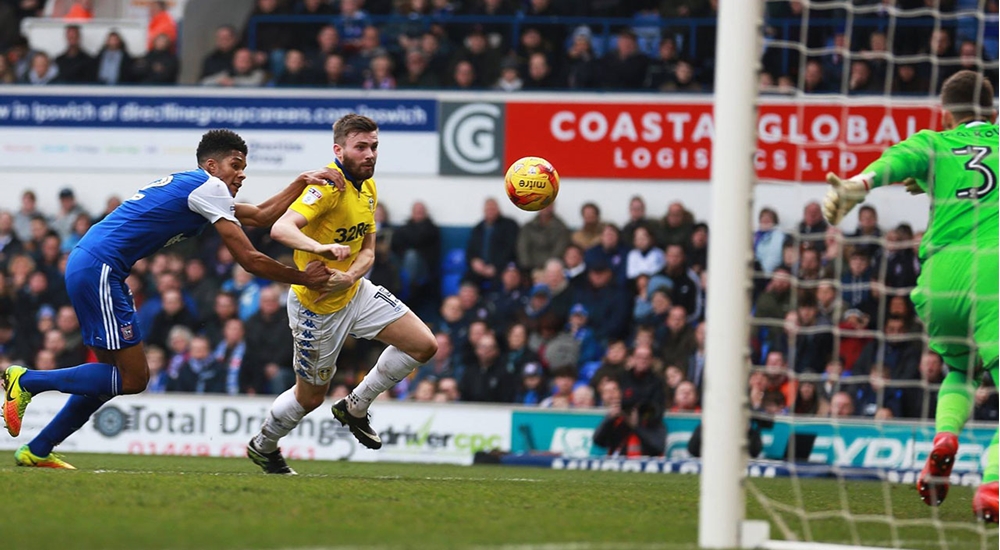 Northern Ireland winger Stuart Dallas rescued a point for Leeds United at the weekend when he scored his third goal of the season in the 1-1 draw at Portman Road against Ipswich Town.

Gary Monk’s side had suffered back-to-back league defeats prior to their long trip to Suffolk and Dallas admitted the team was determined not to lose again on Saturday.

The 25-year-old said: “Obviously we wanted to win the game, but if you can’t win it then you’ve got to make sure you don’t lose and we showed again that we’ve got a great determination.

“Coming here isn’t easy, against a good Ipswich team, a physical team, and on a pitch that wasn’t really suitable for playing football. We dug in.”

He added: “There were a few tired legs out there and I think in the end we kind of settled for a point, but it’s a good point for us and it gives us something to build on.”

With the crucial World Cup qualifier against Norway at the National Football Stadium less than five weeks away Michael O’Neill must be encouraged by the recent form of Conor Washington who was again among the scorers as Queens Park Rangers won 4-1 against Birmingham City at St Andrew’s.

It was the 24-year-old’s third in five games for the Hoops and his sixth in total for the Championship outfit this term.

Meanwhile, in League Two former under-21 international striker Billy Kee, who found the net twice against Mansfield in midweek, added to his tally with a sensational finish in Accrington Stanley’s 2-1 victory at home to Colchester United.

“The goal from Billy is as good as you’ll see anywhere. It was fantastic technique from him,” enthused Stanley boss John Coleman.

“The goal was reminiscent of the one Luis Suarez scored for Liverpool a few years ago when he controlled a 70-yard diagonal ball, brought it down and slotted it past the keeper.

“When Billy shows the kind of form he has done in his last two matches there is no better striker in the league and I think everyone knows that.”

Northern Ireland U-19 striker Ollie Bassett, who is currently on loan at Dorchester Town from Yeovil until the end of the season, came off the bench on Saturday to score in the Robins’ 2-0 win over Dunstable Town in the Evo-Stik Southern Premier.

“It was nice bringing Ollie on down the middle, with his pace and freshness to get in behind them,” said Dorchester manager Craig Laird.

“Young lads like Ollie don’t have to start games to win them. They can come on and win them or come on and secure them so it’s important that I get that knowledge into them.”

The League One outfit’s reward is now an all-London quarter-final clash with Spurs at White Hart Lane next month.

Finally, Enniskillen-born Andy Little made his debut for Stirling Albion in their 1-1 draw with Arbroath in Scottish League Two on Saturday.

The 27-year-old, who has been without a club since being released by Preston at the end of last season, has joined Stirling on a short-term contract until the end of the current campaign.