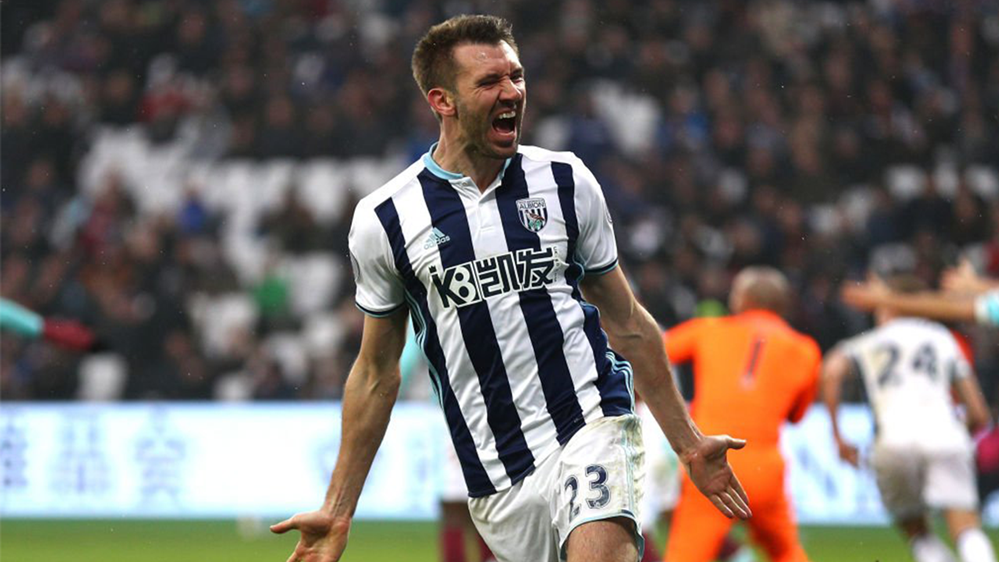 Northern Ireland defender Jonny Evans marked his return from injury with an assist to earn West Bromwich Albion a point in a 2-2 draw at West Ham at the weekend.

The 29-year-old, who was returning from a six-week lay-off because of a calf strain, came on as a second half substitute.

And in the fourth minute of added time he thought he had bagged his second goal of the campaign for the Baggies.

He got on the end of fellow Northern Ireland international Chris Brunt’s corner and his header hit the back of the net. At least that was the initial verdict but on closer inspection the final touch came off his international colleague and team-mate Gareth McAuley – and the Premier League have now confirmed it was McAuley’s sixth league goal of the season.

Evans said afterwards: “At the time I thought I’d scored but then I turned around and saw Big G celebrating and I thought he must have got the goal. In the end though it doesn’t really matter as we ended up with a point.

“Personally, it was nice to get back out on the pitch as I haven’t really done much over the past six weeks. It was a little difficult when I came on but I started to pick up the pace a bit as the game wore on.”

In League One Ryan McLaughlin helped ease Oldham Athletic’s relegation worries with a goal in the Latics’ 3-2 win over basement club Coventry City.

McLaughlin’s second goal this term was a superb individual effort and sealed all three points for the Lancashire outfit to lift them out of the relegation zone.

The 22-year-old said: “I just hit it towards the bottom corner and thankfully it went in. Everything seemed to just open up in front of me and I didn’t really think about it.

“I do though always back myself when I’m running at a defender one v one,” he added. “Any time I can get the ball, turn and run at them then I feel confident and comfortable. I haven’t scored many yet to be fair. It’s only the start of my career but I want to get as many as I can.”

Elsewhere, 18-year-old defender Matthew Smyth celebrated his debut for Scottish League Two side Arbroath with a goal in their 3-1 victory at Montrose on Saturday.

The Enniskillen man, who is on loan at the club from Dundee until the end of the season, only found out he was playing 10 minutes before the start of the game after an illness to first choice centre back Ricky Little.

Meanwhile, there was disappointment for a number of Northern Ireland players in the fifth round of the Scottish Cup at the weekend.

On-loan striker Billy McKay saw his Inverness side swept aside 6-0 by Brendan Rodgers’ Celtic while Alan Mannus and Paul Paton were unused substitutes as Tommy Wright’s side lost 1-0 at McDiarmid Park to Partick Thistle.

The Jags’ reward is a trip to Aberdeen in the quarter-finals after Niall McGinn’s side ended Ross County’s progress in the competition with a 1-0 win.

Striker Liam Boyce, who has 14 goals to his credit this term, believes County need to quickly get over their Scottish Cup exit and start concentrating on picking up vital league points after just one victory in their last six Scottish Premiership outings.

“The boys will regroup and focus on the league and try and get a few points on the board,” stated Boyce, who has now gone four games without a goal.

“We have a crucial game against St Johnstone next week and it’s always a close game when we play them. We just need to be more creative going forward and create a few chances. But with the players we have we can do that,” he added.