The Electric Ireland Women's Challenge Cup reaches the semi-final stage this evening (27 August) with the top four clubs in the country still in with a shout of getting their hands on the prestigious piece of silverware.

One tie sees holders Glentoran Women lock horns with Cliftonville Ladies at Clandeboye Park in Bangor, while the other pits Crusaders Strikers against Sion Swifts Ladies at Mill Meadow in Castledawson. Both games are due to get under way at 7.30.

The Glens continue their defence of a trophy they've held since 2018 against a Cliftonville side that have matched them ball for ball this season.

Both sides are currently tied at the top of the Danske Bank Women's Premiership on 40 points apiece, with the Glens just in front in the standings due to a better head-to-head record.

Indeed this will be their fifth meeting this season with the Glens winning three of the four previous outings, with Cliftonville's only success coming back in May with a 4-2 victory at Solitude.

Glentoran reached the last four courtesy of a bye over Derry City Women and then a seven-goal defeat of Carnmoney Ladies in the quarter-finals, while the Reds accounted for Linfield Ladies followed by victory over Lisburn Ladies.

With both sides packed with senior international talent it will certainly be a game to keep an eye on, as will the clash at Moyola Park's ground between the sides currently third and fourth in the Premiership.

For Crusaders, managed by former Northern Ireland international Jonny Tuffey, it will offer them a chance to immediately bounce back following a surprising league reversal to Derry City on Wednesday night in what was only the Candystripes’ second win this season. 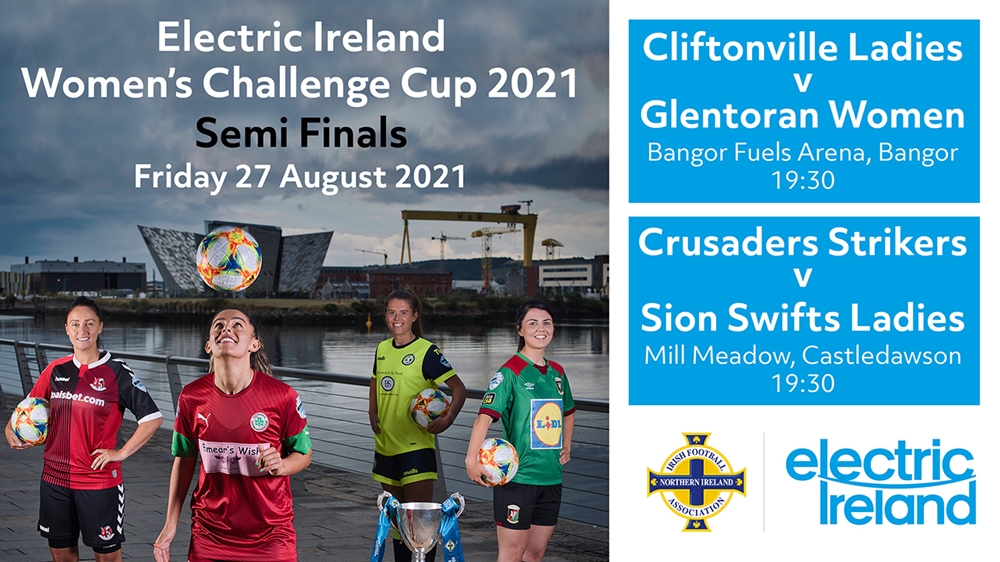 Sion Swifts have had a mixed campaign thus far but recently embarked on a five-match winning streak so they will undoubtedly pose a threat to the Crues. That said the Strabane-based side have found the Strikers a tough nut to crack this year, losing two and drawing one of their three earlier meetings.

To get to the semi-finals Sion hit 11 goals without reply in a Tyrone derby against Killen Rangers and bagged another seven away to another Tyrone team, Mid Ulster Ladies, in the following round, keeping clean sheets in both. The Crues, meanwhile, thumped East Belfast 8-2 in the second round before clocking up a 4-0 win over St James' Swifts in the quarters.

The winners of tonight’s games will meet in the decider on Friday 15 October at the National Football Stadium at Windsor Park.

The Irish FA’s Women’s Challenge Cup Committee, which oversees the competition, is urging fans to go along to the matches to support the semi-finalists. The entry charge per game is £5 (£3 concessions) and there are no testing requirements for spectators.