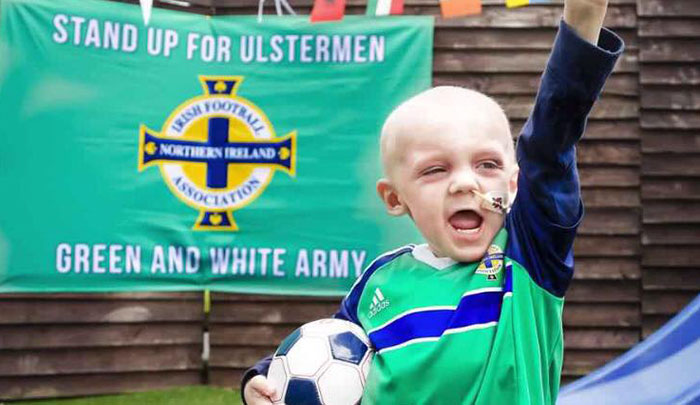 The family of Belfast boy Zak Brennan hope to raise much needed funds at the National Football Stadium at Windsor Park as Northern Ireland take on Croatia in a friendly tonight.

Zak suffers from a rare and aggressive childhood cancer, Neuroblastoma, and his parents are desperate to raise £134,000 for pioneering treatment in the United States. The family have already raised over £80,000.

Just over a year ago, Zak Brennan was a happy toddler – running, playing and enjoying a holiday with his parents.

Within weeks, he had become seriously ill and Neuroblastoma was diagnosed. After a devastating year of chemotherapy, surgery, stem cell transplants and radiotherapy, time is running out to find a more permanent cure - with the best possible chance offered by cutting-edge trials in America.

His family – mum Leeanne and dad Gareth - launched the Zakky Brennan Fund in a bid to raise enough money to get their much loved son pioneering new treatment.

“The treatment Zak has had with the NHS has been exceptional but this cancer is really aggressive and to give him the best chance, we need to get this treatment in the US. Thankfully, he has been accepted onto this clinical trial pending end of treatment scans, but now we have to raise this huge sum of money to get him there,” his dad Gareth said.

The people of Northern Ireland have been incredibly supportive holding fundraisers, collections and raffles and this is now going to be held in a fund for Zak with the charity Solving Kids’ Cancer.

They have received the support of hundreds of individuals, dozens of local businesses as well as comedian Alan Carr and boxer Carl Frampton.

“Time is running out for us to raise this money. He would need to start treatment in the US in January so we only have a short time to raise a lot of money. Zak is a fighter. He’s had some dark days in the course of his treatment here in Northern Ireland but he gives it everything and we are determined to do everything we can for him,” his dad Gareth explained.

Information on the fund is at http://solvingkidscancer.org.uk/appeal/zakky/