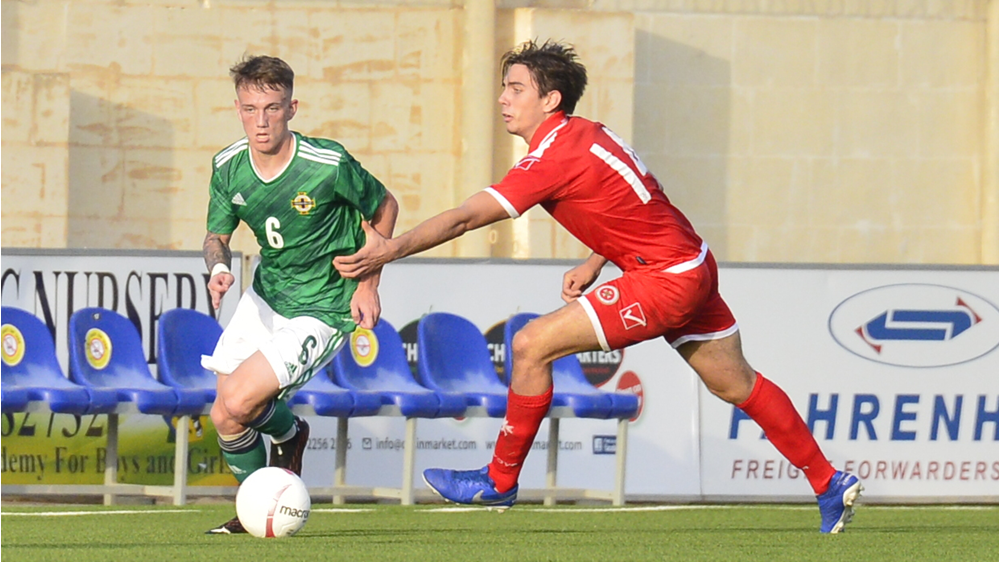 They will be up against high-flying Denmark in a behind closed doors U21 Euro 2021 qualifier at the Showgrounds (5 pm start).

The Danes are currently sitting top of Qualifying Group 8 following five wins and one draw in their qualification campaign to date. And they have scored 14 goals along the way.

They dropped their first points in the group after drawing 1-1 at home against Ukraine on Friday, while Northern Ireland in contrast registered their first win in qualifying with a deserved 2-0 win over Malta the same night. They had previously drawn three and lost two.

One of those defeats came against the Danes last October. Northern Ireland looked to be heading for a deserved draw in Aalborg when Danish substitute Jens Odgaard popped up with a spectacular winner in the 86th minute. It finished 2-1 to the Danes.

Odgaard was not in the team who kept Denmark’s unbeaten record intact with a late equaliser against the Ukrainians, however they have other players capable of producing spectacular goals, not least Jonas Wind from FC Copenhagen and Andreas Olsen, who is with Serie A side Bologna.

Set to drive the Danes forward is captain Victor Nelsson, who also plays for FC Copenhagen, and midfielder Carlo Holse, who plies his trade with Rosenborg in Norway.

However, Northern Ireland U21s caretaker manager Andy Crosby is in buoyant mood after tasting victory in his first game at the helm thanks to goals from Linfield defender Ross Larkin and Sheffield United striker David Parkhouse.

Crosby will be hoping the lively Parkhouse can produce the goods again and he will also be looking to midfield pair Ethan Galbraith (Manchester United) and Alfie McCalmont (Leeds United) to dictate play, ably supported by Birmingham City’s Caolan Boyd-Munce and St Johnstone’s Ali McCann. Both Galbraith and McCalmont were called up to the senior panel for last night’s Nations League tie against Norway but did not feature in the game.

Northern Ireland U21s captain Conor Hazard was rarely troubled against Malta, however both the Celtic keeper and the home defence can expect to be a little bit busier this afternoon.