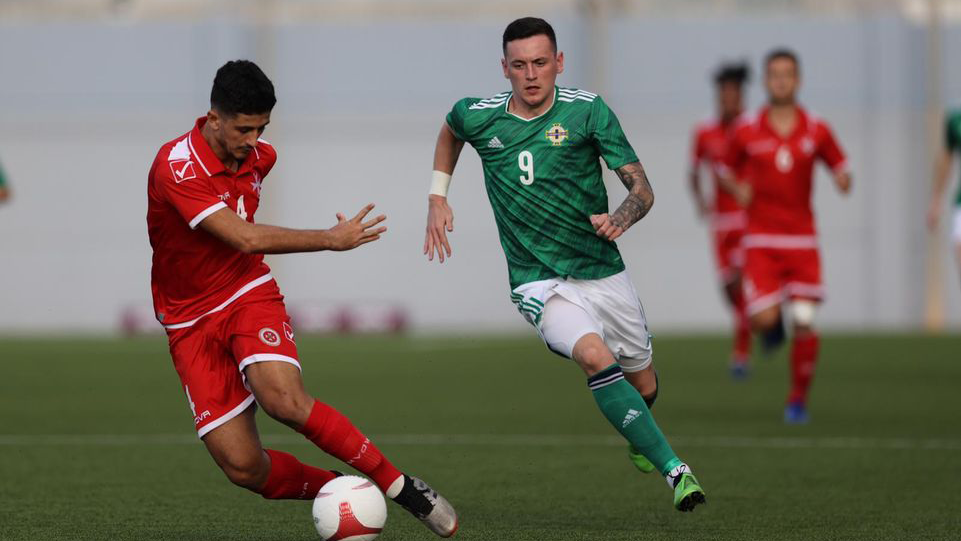 Northern Ireland’s U21s registered their first win in U21 Euro 2021 qualifying with a deserved 2-0 win over Malta.

Debutant Larkin scored the opener and Parkhouse added the second in the behind-closed-doors match at the Centenary Stadium in Ta’ Qali.

The boys in green and white were slightly flat in the first half but sprang to life after the break to engineer the victory.

The first chance of the match fell to Northern Ireland defender Nathan Kerr, who shot wide of the target.

Crosby’s charges enjoyed plenty of possession, however the next clearcut chance fell to the Maltese. Conor Hazard had to be on his toes on the half-hour mark to push away a Myles Beerman effort and six minutes later he saved a shot from Alexander Satariano.

Down the other end Parkhouse shot wide of the mark and then had a drive saved by Malta keeper Timothy Aquilina.

On the stroke of half-time Northern Ireland were awarded a penalty when Larkin was fouled by Beerman, however Parkhouse’s spot kick was superbly saved by Aquilina.

Northern Ireland were much brighter after the break. Midfielder Ali McCann had a good chance on 51 minutes but his effort drifted wide of the woodwork.

They took the lead six minutes later. Midfielder Ethan Galbraith, who was on the receiving end of some strong challenges throughout, played a quick free-kick to Daniel Amos. His cross was met by defender Eoin Toal heading the ball against the post, Larkin was on hand to steer the rebound into the net.

McCann had another decent effort, forcing Aquilina into a save, before the U21s extended their lead. McCann burst into the area and Malta tried to clear, however the ball fell to Parkhouse and his low shot nestled in the back of the net. It was a fine finish.

Malta tried to claw their way back into it and had a couple of half-chances towards the end but Crosby’s side had the victory wrapped up by then.

Next up for Northern Ireland’s U21s, who had managed three draws and suffered two defeats before today’s success, is a qualifier against table toppers Denmark, whom they face behind closed doors at Ballymena Showgrounds on Tuesday (5pm start).

The Danes won the reverse fixture 2-1 back in the autumn. They dropped their first points in Qualifying Group 8 today after drawing 1-1 at home against Ukraine in their sixth match of the campaign.