The only all-Premiership tie in round one of this season’s Samuel Gelston’s Whiskey Irish Cup will kick off a veritable feast of Irish Cup action this weekend.

The game at Mourneview Park – it has a 7.45pm start – is set to be streamed live on the BBC iPlayer and the BBC Sport NI website.

The form guide points to a tight affair in Lurgan, although Crusaders start as slight favourites to progress to the last 16.

That win over the Reds has provided a big boost for the Crues, who are closing in on the four teams currently sitting above them in the Premiership table.

However, Glenavon, who are in eighth position in Northern Ireland’s main league just now, have had some notable scalps over the past month or so. They have enjoyed home wins against the Crues and Coleraine plus an away derby success against Portadown.

The big guns against the minnows is the main narrative in the last 32 of this season’s Irish Football Association Challenge Cup but it’s hard to see where there could be upsets when it comes to intermediate level teams taking on top flight opposition in particular.

Cup holders and current Premiership leaders Linfield are set to host Mid-Ulster Intermediate A side Oxford Sunnyside at the National Football Stadium at Windsor Park tomorrow (Saturday 8 January), the day when the remaining first round matches will be staged. And the Blues are expected to stroll past them.

The other Mid-Ulster Intermediate A side in round one, Armagh-based Windmill Stars, will also be up against it when they take on Coleraine away from home.

And Islandmagee, from the Premier division of the Amateur League, have a mountain to climb away to Cliftonville at Solitude.

Fellow Amateur League Premier side Ards Rangers are heading to Fermanagh to take on NIFL Championship outfit Ballinamallard United. The Co Down boys will be the underdogs in that one.

The three other intermediate teams who battled their way through four preliminary rounds to be in the round one draw along with 24 Premiership and Championship clubs – NIFL Premier Intermediate League sides Limavady United, Portstewart and Newington – will be aiming to cause upsets.

Limavady are off to Shamrock Park to tackle Premiership side Portadown, while Portstewart are heading to Derry-Londonderry to take on Institute from the Championship and Newington, fresh from winning the Steel and Sons Cup over the Christmas period, are away to Queen’s University.

Also tomorrow Premiership side Warrenpoint Town will battle it out with near neighbours Newry City, who are currently six points clear of the chasing pack at the top of the NIFL Lough 41 Championship.

Four other Championship sides will be aiming to make their mark against Premiership opposition, too.

Loughgall will fancy their chances away to Ballymena United and Knockbreda are hoping home advantage tips their tie against Dungannon Swifts in their favour. Dergview will have it all to do in Tyrone against Glentoran, while Ballyclare Comrades face a stiff test at home to Carrick Rangers.

Completing the schedule tomorrow are two all-Championship tussles. Ards are at home to Dundela and Harland and Wolff Welders will host Annagh United. 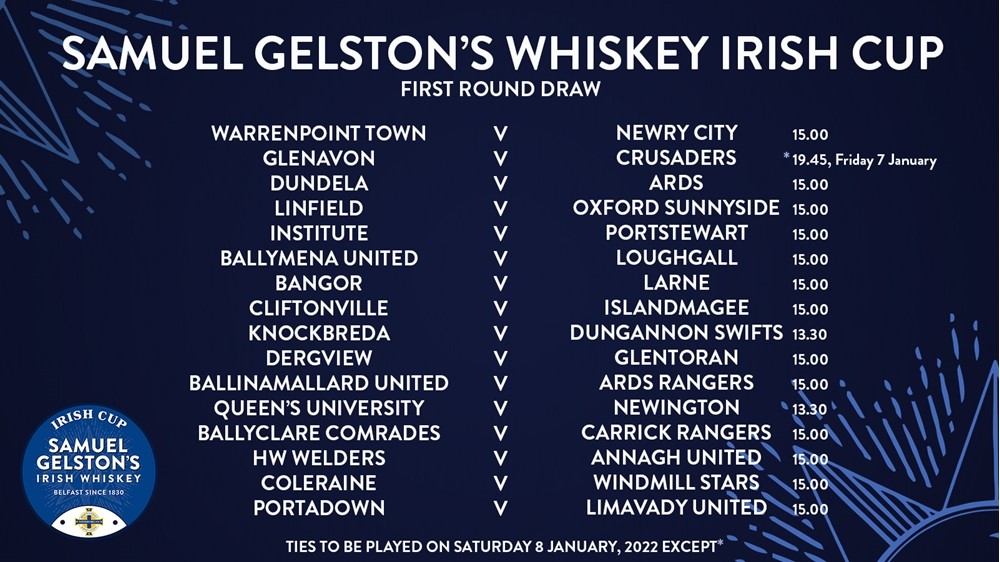