Kenny Shiels’ senior women’s squad are set to take part in a 10-day training camp at the Marbella Football Centre on the Costa del Sol from 14 to 23 February.

And as part of the camp they will face Faroe Islands, Switzerland and Romania in friendlies at the Marbella venue, which is widely used for pre-season and training camps by the world’s top club sides and national teams.

We are constantly trying to teach and learn from our time with the players. This trip will give us ideal preparation for April's World Cup qualifiers

The Swiss and the Romanians are both ranked higher in the world than Northern Ireland, who rose up the FIFA Coca-Cola Women’s Ranking a couple of places to 46th in the latest list, which was published last month.

The first game in Spain, against Faroe Islands, is scheduled to be played on Thursday 17 February with a 3pm kick-off UK time. The Faroese, whom Northern Ireland faced in the qualifiers for this summer’s Women’s Euros, are currently ranked 99th in the world.

Game two will see Shiels’ side take on Switzerland on Sunday 20 February (11am start UK time). Like Northern Ireland, the Swiss will be competing at UEFA Women’s Euro 2022. Their global ranking is 17th.

The Romanians will also be tricky opponents. Ranked 42nd in the world, they missed out on an appearance at the Euros when finishing third in their qualifying group behind Belgium and Switzerland. The game against Romania takes place in Marbella on Wednesday 23 February (11am UK time).

Northern Ireland-based players in Shiels’ squad - 22 in total – have begun training full-time in preparation for the Euros and the senior women’s team manager said: “We are really looking forward to these three games in Spain. It will provide us with a measurement of our programme and its progression.

“We are constantly trying to teach and learn from our time with the players. This trip will give us ideal preparation for April's World Cup qualifiers. Everything we do is to help the players prepare to prepare.

“During February we will look to step up our performance levels to ensure we reach maximum standards.” 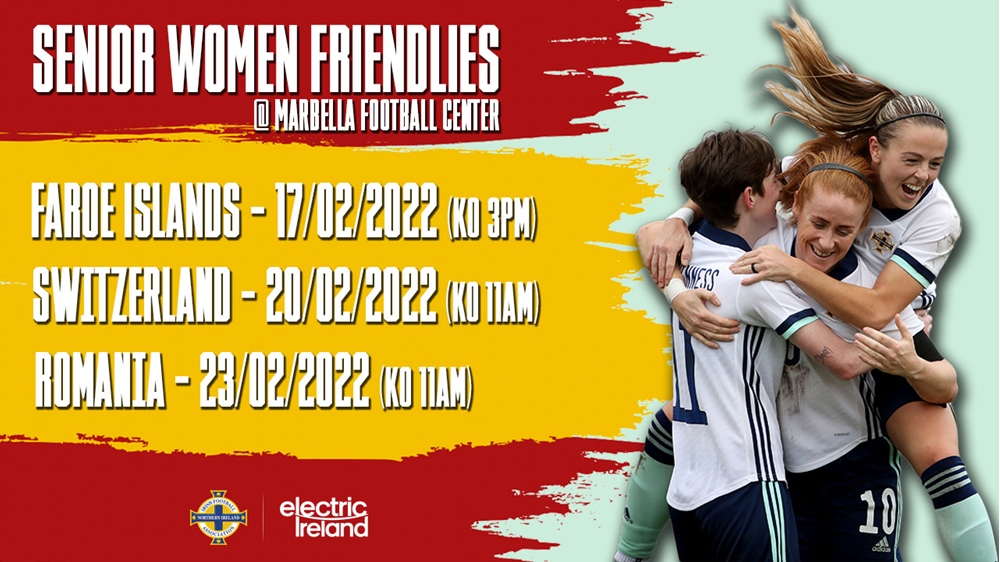 Shiels will name his squad for the trip to Spain in early February.