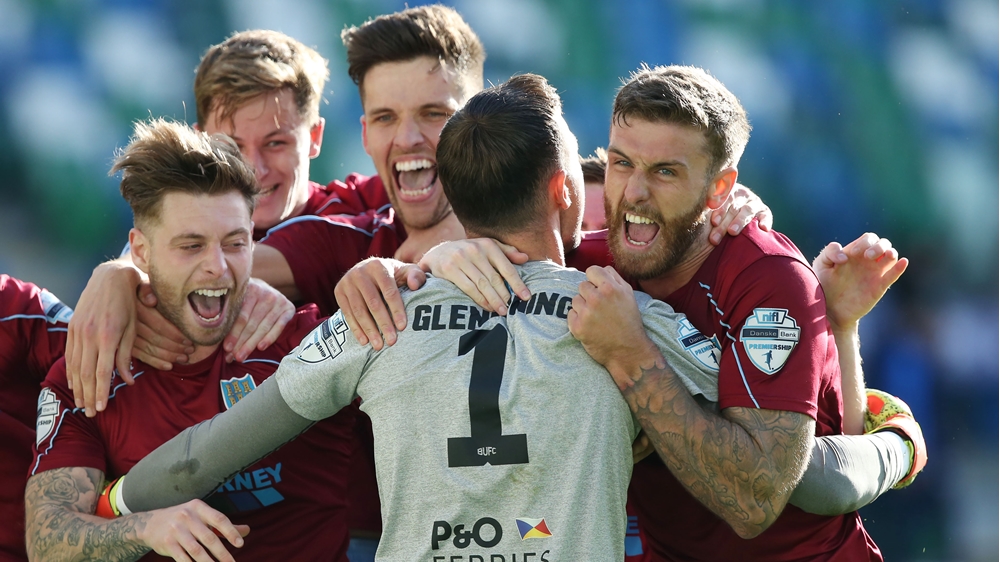 Ballymena United booked their place in this season’s Sadler’s Peaky Blinder Irish Cup final after winning a dramatic penalty shoot-out at the National Football Stadium at Windsor Park this afternoon.

The Sky Blues won the shoot-out 3-1 after the semi-final ended 1-1 after 120 minutes-plus.

Coleraine must have thought they had won the last four match with an Eoin Bradley goal on 45 minutes but Ballymena struck in the 96th minute to force the match into extra-time.

The game remained at one apiece following the extra period – and then came the shoot-out drama.

There was a remarkable start to the penalties when Ballymena captain Jim Ervin’s spot-kick was saved by Coleraine keeper Chris Johns and Coleraine midfielder Stephen Lowry hit the post.

Ballymena’s Andy McGrory drilled home the next spot-kick before Bradley missed. James Knowles scored for the Braidmen and James McLaughlin netted for Coleraine. Steven McCullough then stepped up to slot the ball home, meaning Ben Doherty had to score to keep Coleraine in it, however he skied his shot to give David Jeffrey’s side a 3-1 win shoot-out victory.

Coleraine had the edge throughout the match, with Ballymena’s back-line the busiest of the two defences.

The first chance of the behind closed doors match fell to Ballymena full-back Tony Kane who fired in a free-kick which drifted wide.

In the seventh minute Bannsiders captain Stephen O’Donnell headed the ball into the net from a Josh Carson free-kick but his effort was ruled out for offside.

Sky Blues keeper Ross Glendinning then produced an excellent save from a Bradley header before Doherty just failed to connect with a Jamie Glackin cross, and later the Ballymena keeper snuffed out a low cross from Aaron Traynor.

Ballymena strikers Cathair Friel and Adam Lecky combined well on 38 minutes, however Friel’s low shot from an angle was easily gathered by Johns. Minutes later another effort by Kane from a free-kick failed to trouble Johns.

On the stroke of half-time Coleraine took the lead. Jonny Addis pulled down Aaron Jarvis just outside the area. Bradley stepped up to curl the free-kick into the top corner. It was a sublime strike.

In the 56th minute Carson slipped the ball to Doherty inside the area but his close range effort clipped the outside of the post.

On the hour mark a whipped Carson cross was punched away by Glendinning as Glackin closed in.

Seven minutes later Lecky fed Ballymena substitute McGrory just outside the area but he drove his shot straight at the keeper.

In the 78th minute Coleraine substitute McLaughlin was upended just outside the area. Bradley tried his luck again from the free-kick but this time he hit the post.

On 85 minutes Lecky’s looping header from a corner was easily collected by Johns and that appeared to be the last meaningful action, but deep into added time four Ballymena subs fashioned the equaliser.

A McGrory cross into the box found Aaron Burns who headed the ball across the goal to Leroy Millar and his low cross was turned in by Kenneth Kane from a yard out.

Right at the death Glendinning produced a super save from a long range McLaughlin strike and then it was extra-time.

McLaughlin had the ball in the net early in the extra period but the whistle had already gone for offside as the ball trickled over the line.

Then the striker produced a fine solo run before scuffing his effort wide of the post before Doherty shot over the top and Coleraine substitute Emmett McGuckin did likewise.

Down the other end Ballymena sub James Knowles had a rasping effort blocked by a Coleraine defender before Steven McCullough’s corner drifted narrowly wide.

Then came the shoot-out drama in which Ballymena prevailed. They will now return to the stadium on Friday (31 July) for the final.