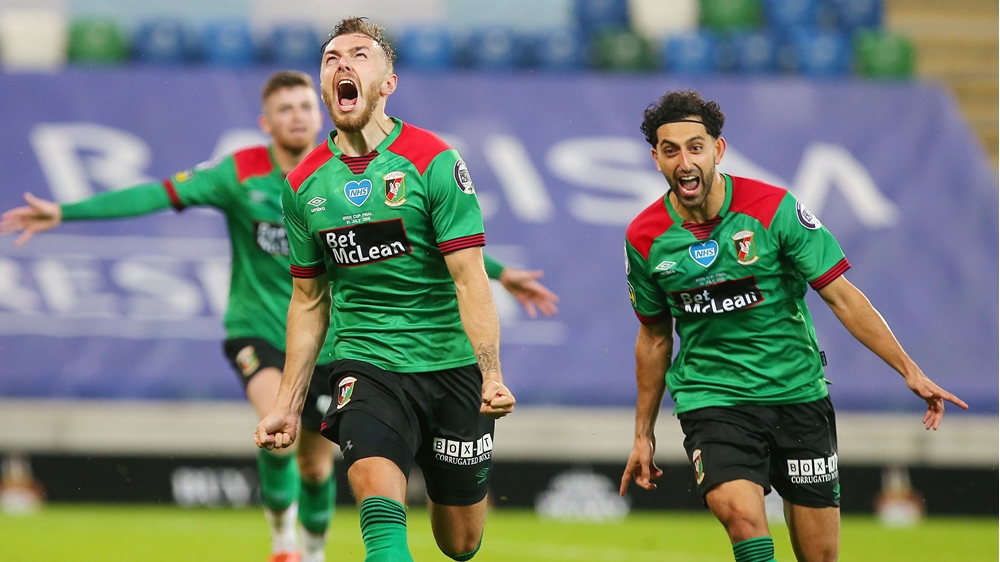 The game looked to be heading for penalties when the striker popped up with six minutes to go to seal a 2-1 victory for the Glens at the National Football Stadium at Windsor Park tonight. 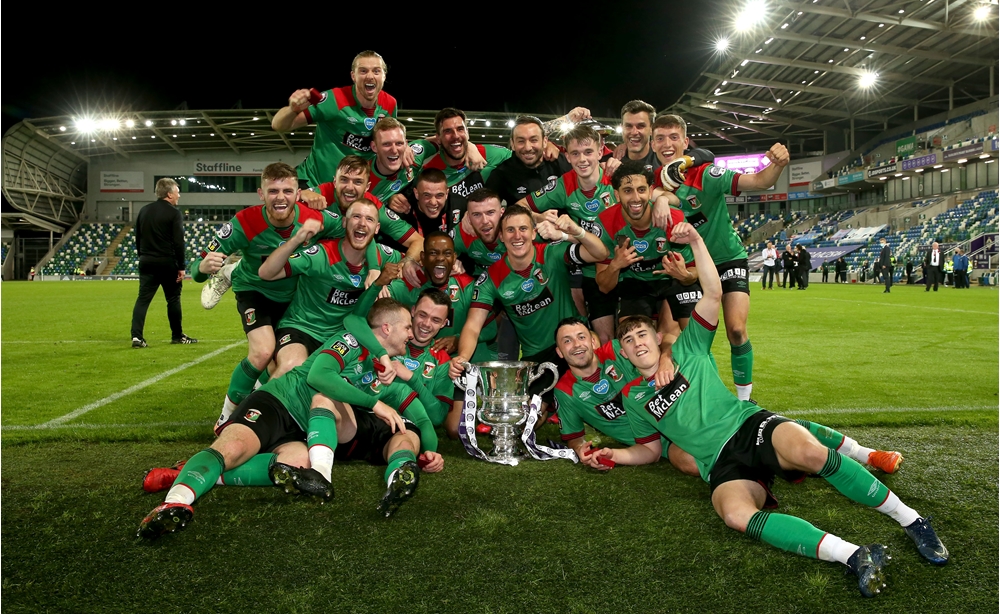 The cup final, played in front of 500 spectators, was the first competitive senior level football match in the UK with fans in attendance since the Covid lockdown began in March. And it didn’t disappoint.

Ballymena boss David Jeffrey made a couple of changes from the side that defeated Coleraine in the semi-finals earlier this week, with Andy McGrory and Leroy Millar coming in for Tony Kane and Ryan Harpur, while Glens head coach Mick McDermott stuck with the same eleven that started the last four game against Cliftonville. 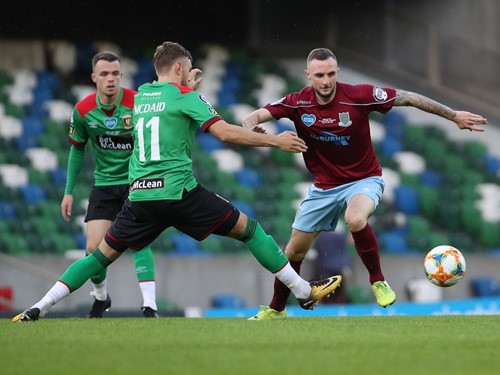 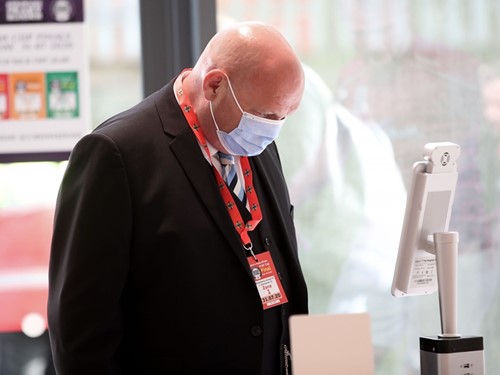 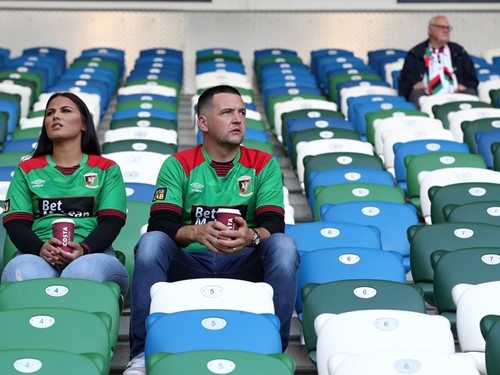 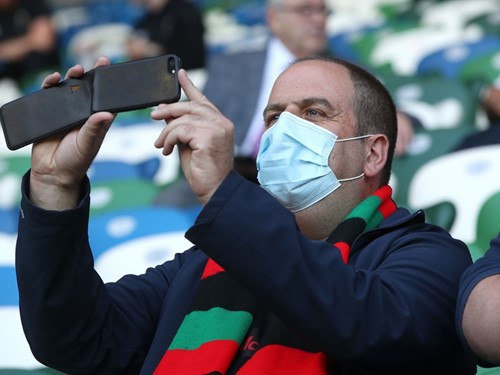 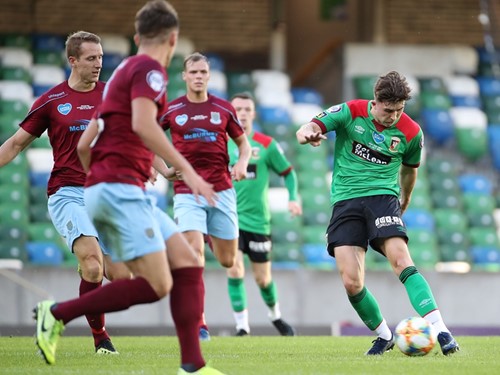 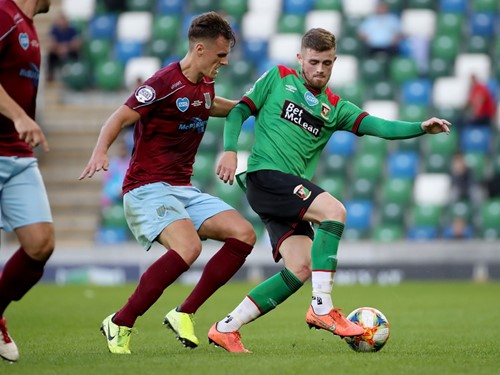 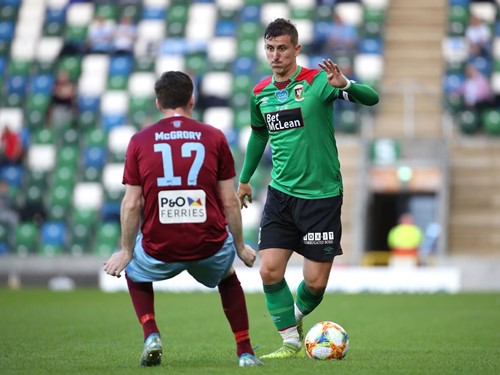 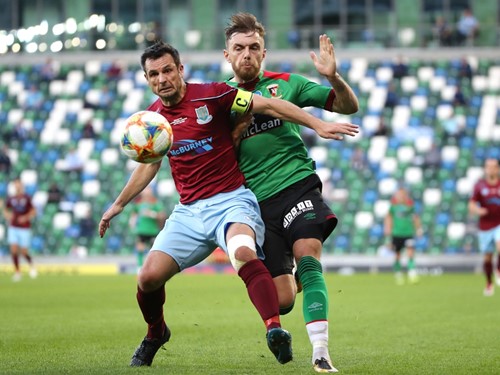 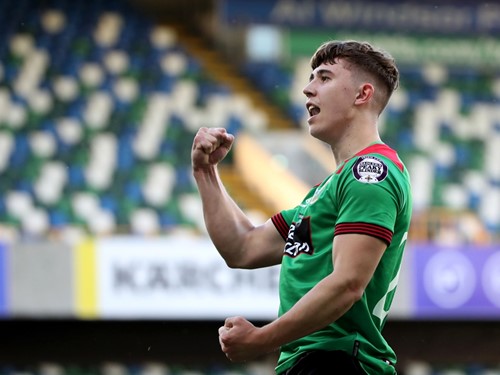 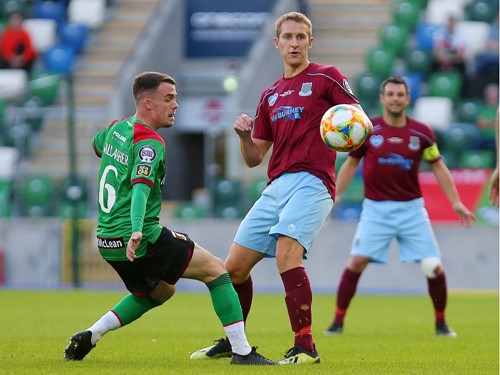 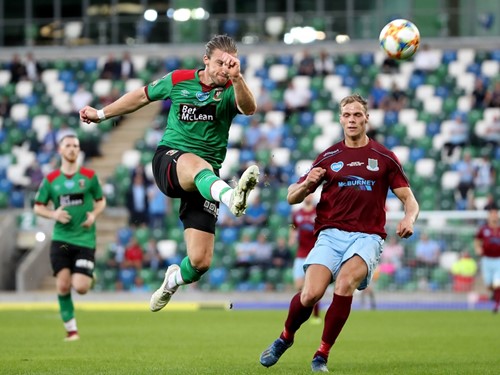 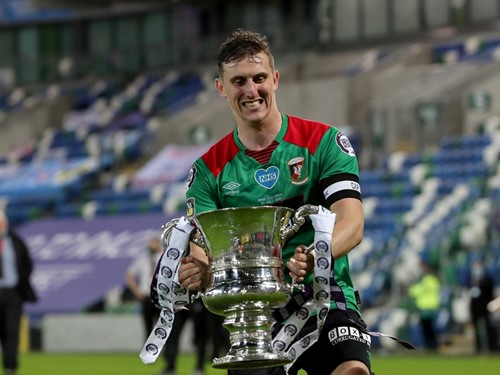 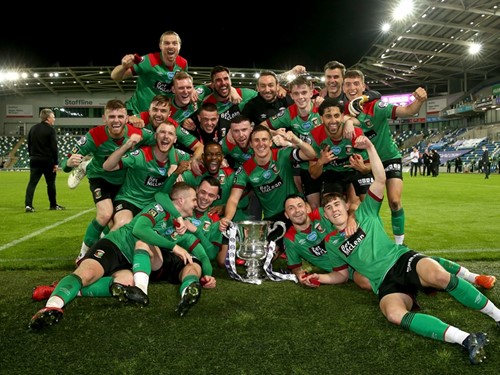 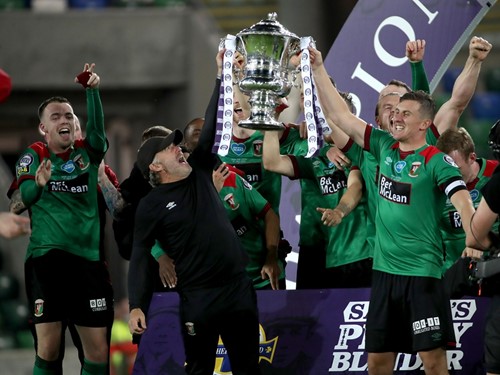 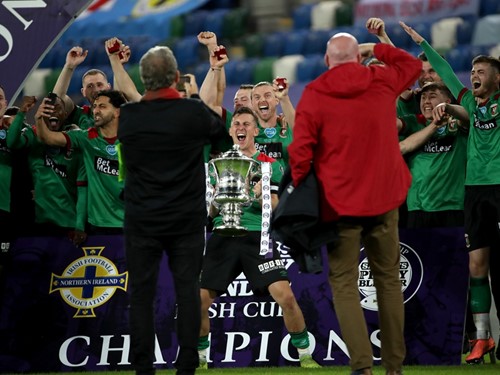 Ballymena, who started brightly, produced some neat interchanges in the opening stages. Josh Kelly went charging towards goal on 16 minutes but squared the ball into space when he probably should have let fly.

Five minutes later the Glens had their first effort on goal. Navid Nasseri jinked his way into the area and Glendinning saved his low shoot with his feet. The rebound fell to the winger and he scooped his second effort into the side netting.

Within a minute Glentoran had scored the opener. Paul O’Neill picked up the ball on the right and drifted inside to the edge of the D before firing a low shot into the bottom corner just out of Glendinning’s reach.

The Braidmen regrouped quickly and in the 26th minute Steven McCullough’s low delivery from a corner was turned towards goal at the near post by a combination of a Cathair Friel’s flick and Joe Crowe’s block, however Glentoran keeper Elliott Morris managed to gather the ball.

Then the lively Christopher Gallagher went on a mazy run across the face of the Ballymena goal and slipped the ball to Nasseri whose close range scuffed shot was cleared by Glendinning.

Ballymena were dealt a blow when the tricky Andrew McGrory limped off with an injury. Veteran Sky Blue Tony Kane was his replacement.

Joe Crowe’s speculative shot from long range whizzed over the bar before a cross from Tony Kane was headed over the top by Ballymena striker Adam Lecky and then Marcus Kane’s scooped shot was well off target.

The Braidmen drew level just after the break. Steven McCullough fired in a corner and Friel nipped in front of his marker to guide the ball home from eight yards with a perfectly executed flicked header.

On 57 minutes Friel broke into the area and fired in a low shot which was cleared by the Glens defence.

Five minutes later Nasseri pushed the ball back to Elvio Van Overbeek just outside the area but his first-time shot sailed over the top. And Tony Kane shot wide when a loose ball dropped at his feet.

In the 78th minute Lecky’s header across the face of goal just evaded Millar, and on the stroke of full-time Glendinning bravely collected a looping delivery from Paddy McClean and Leroy Millar’s pinged cross was plucked out of the air by Morris.

In extra-time the first chance fell to the Sky Blues when McCullough curled a free-kick over the bar. Down the other end Marcus Kane got on the end of a cross but headed straight at Glendinning.

In the eighth minute of added time a swift break from Nasseri eventually saw the ball falling to McDaid and his excellent curler drifted just wide of the post.

McDaid, who had been kept quiet for most of the game, pounced in the 114th minute to seal the victory for the Glens. It was the striker’s sixth goal in this season’s Irish Cup.

The winner came when substitute Ciaran O’Connor fired a low cross into the area and McDaid, finding himself free in the box, drilled a low shot past Glendinning.