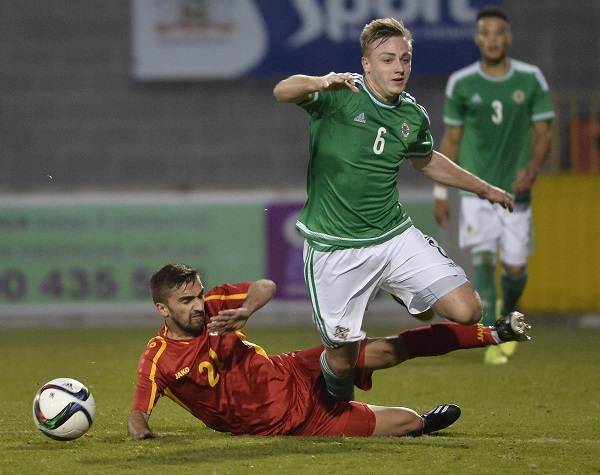 The former Glenavon player signed a one year deal with the Shropshire outfit following his release from Barnsley in the summer however he failed to make a senior appearance during his brief stay at New Meadow.

Meanwhile 19 year-old Cameron Dummigan has committed his future to Championship club Burnley after putting pen to paper on a new two and half year deal.

The talented right-back, who is currently enjoying a loan spell with Oldham Athletic, will now remain at Turf Moor until the end of the 2017/18 season.

“We're pleased because it's another young player who we’ve been monitoring wisely for the last couple of years,” said Burnley boss Sean Dyche “He had an unfortunate run last year because he would have been around the squad a lot more but for an injury.

“He’s done fantastically well to get through that, he’s shown really good signs during this pre-season and we felt the loan move to Oldham was appropriate and he's done ever so well there

Dundee defender James McPake is hoping to return to full fitness for the start of next season after fracturing his kneecap in the derby clash with Dundee United earlier this month.

The former Northern Ireland international fractured his left knee in three places and knew instantly it was a bad injury.

“My knee was a bit displaced to say the least," said McPake, whose only appearance in a green shirt was in the 6-0 defeat to the Netherlands in June 2012, “I knew straight away I was going to be out for a long time. I knew I’d need an operation but the big worry was how the ligaments were.

“The scan was fine.” he added, “the cruciate was a bit stretched but there was no rupture thankfully. My target is to be ready to go for the first day of pre-season, doing what the rest of the boys can do. I’m confident it won't be any longer than that and that’s what’s keeping me going.”