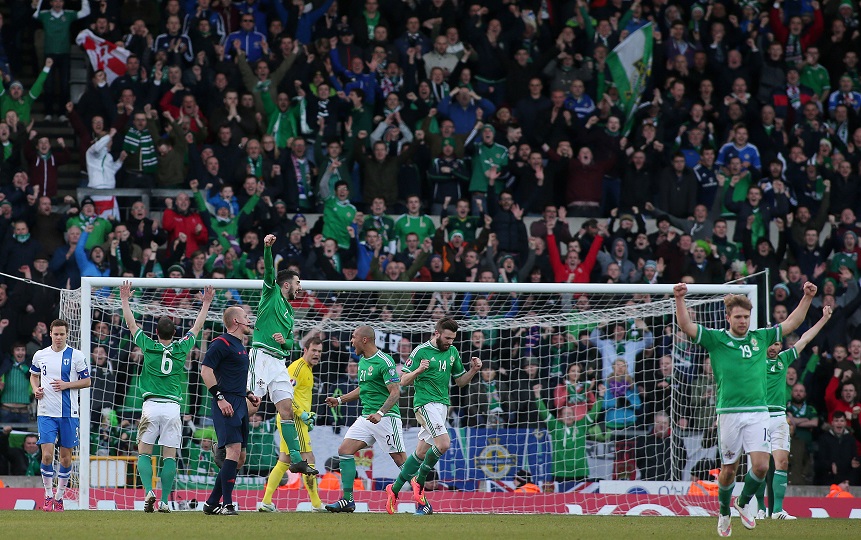 Northern Ireland have qualified but head in to tomorrow evening’s match against Finland hoping not only for the win, but also to finish top of the Group.

The Finns visited Belfast on the 29th of March this year and lost 2-1; Kyle Lafferty netting both goals.

Finland can no longer qualify as they are 5 points behind 3rd placed Hungary who face Greece away. The second automatic qualification spot is now between them and Romania who are away to the Faroe Islands.

Ahead of tomorrow evening’s clash with Finland we look at some interesting statistics going in to the final UEFA EURO2016 Qualifier.

-Captain Steve Davis’ two goals on Thursday evening were his first at Windsor Park since scoring in the 4-0 European Championship win over the Faroe Islands in August 2011.

-FOUR of Kyle Lafferty’s sixteen international goals have been scored against Finland. His first ever goal for Northern Ireland was in Helsinki in a 2-1 friendly victory in August 2006. He scored against them again in another friendly encounter at Windsor Park in August 2013 which ended in a 3-3 draw. He then scored two wonderful goals to secure a crucial 2-1 success over them in Belfast last March.

-Northern Ireland have not scored a competitive penalty away from Windsor Park since David Healy converted from the spot in a 2-1 defeat to Iceland in September 2007.

-Manager Michael O’Neill will not be fielding a weakened team tomorrow. That gives both West Brom’s Gareth McAuley and Reading midfielder Oliver Norwood an opportunity to be the only two players to feature in all ten matches. Twenty-six players have featured in total throughout the campaign.

- If Gareth McAuley does indeed feature against Finland he will win his 57th cap which would lift him into 18th place in the all–time appearance list moving him ahead of the likes of Billy Bingham, Danny Blanchflower and Damien Johnson all of whom made 56 appearances.

-Five players have scored throughout the campaign. Niall McGinn, Josh Maginness, Steven Davis, Gareth McAuley and leading goalscorer Kyle Lafferty will all be hoping to add to their tally tomorrow.