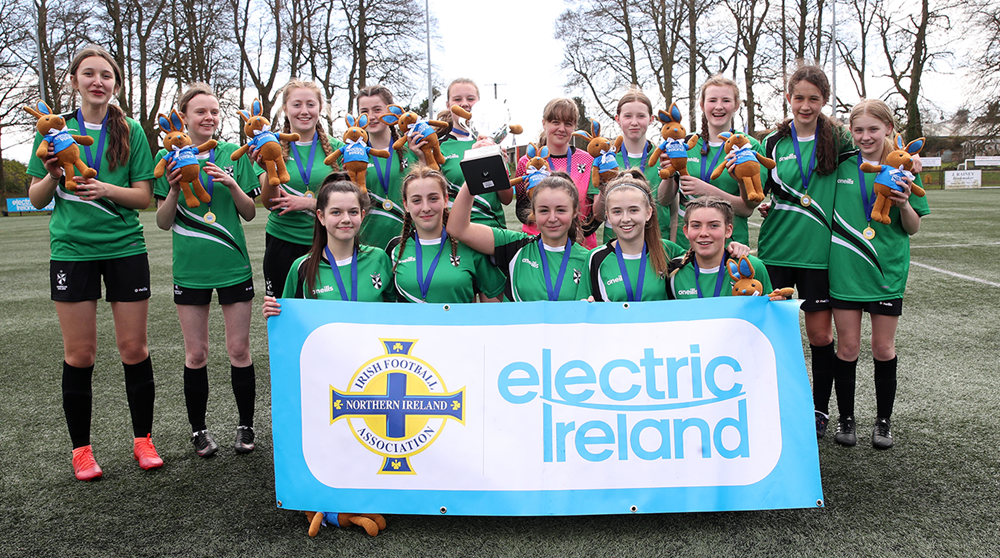 More than 1000 girls will be competing in the Electric Ireland Super Schools competition across Northern Ireland this week.

The seven-a-side competition will be played over four days and involves girls’ teams from years 8/9 and 10/11.

It kicks off today at Brook Leisure Centre in Dunmurry and will finish on Thursday (16 June) at Valley Leisure Centre in Newtownabbey. The other locations are Cookstown’s Mid Ulster Sports Arena and Lurgan Town Arena.

Electric Ireland Junior Schools’ Cup champions Dominican College will be looking to finish their debut year in schools’ football on a high. The north Belfast school has four sides competing across the two age groups.

Holy Cross College Strabane will also be hoping for a successful competition after their 2019 victory in the 8/9 age group.

Damian McLaughlin, Schools and Futsal Officer with the Irish FA Foundation, said: “This is a really enjoyable way to finish off this year’s schools’ football. The girls’ competitions have been fantastic this year with so much talent on show.

“I am excited to see so many different schools involved and hope this will build towards even greater numbers of girls participating in school competitions next year. With the Women's Euros on the horizon this is a chance to see some of the stars of the future.”

He further pointed out that Northern Ireland’s qualification for the UEFA Women’s Euros this summer has seen girls’ football become increasingly popular in schools across the country.

Image: Dominican College will be hoping to add to its haul of silverware this year in the Super Schools competition. The north Belfast school’s U14 side have already lifted the Electric Ireland Junior Schools’ Cup, while the U16s won the Danske Bank competition for girls’ 11-a-side school teams.