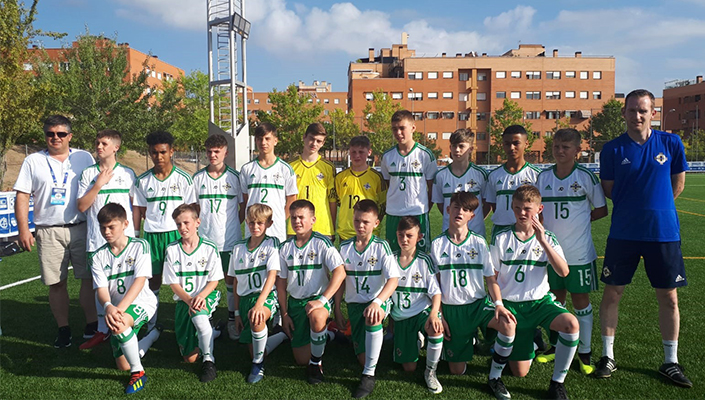 Club NI’s U14s finished 19th overall out of 32 sides in this year’s Madrid Cup, winning four and drawing one of their seven games.

And striker Callum Marshall was on fire during the tournament – so much so that he was top scorer overall with eight goals.

Michael McClean’s side’s first defeat came in the group stages - 1-0 against Spanish outfit Rayo Vallecano - and that effectively cost them a place in the last 16.

However, they performed well in the 17-32 stage and won three games out of four to finish 19th overall.

In their opening fixture in the group stages the Northern Ireland boys secured a 1-1 draw against Japanese outfit JEF United, Marshall getting his first of the tournament.

Their game against Spanish side Rayo Vallecano could have gone either way, however Vallecano grabbed the decisive goal.

However, Club NI bounced back in their final group game to defeat Chelsea 1-0 thanks to another Marshall strike.

In the 17-32 stage Club NI produced an impressive display in their opening game, defeating Madrid side Alcobendas Levitt 10-0. Marshall helped himself to five goals, while Padraig McVicker and Patrick Kelly both scored twice and Jack Patterson also got on the scoresheet.

Their next opponents were St Joseph’s Boys from Dublin and they eased past them thanks to another Kelly goal.

Danish outfit Aarhus then inflicted a second defeat on Club NI, with a single goal separating the sides.

In their final game in the 17-32 section the Northern Ireland boys claimed 19th overall with a 1-0 success against Flyeralarm Admira from Austria. And Marshall hit the back of the net once again.

Club NI U14s Head Coach Michael McClean said: “The boys were excellent throughout the whole tournament. Defensively we were really well organised and the team played some great football at times.

“For many of the players this was their first trip away with Club NI and as the tournament went on you could see them developing and growing as a team. All the staff were very proud of all the players.”

The head coach also said for Callum Marshall to finish the tournament as overall top goalscorer was “a great achievement”.

The annual Madrid Football Cup, staged at Alcobendas in Madrid, features the youth sides of leading European clubs as well as teams from around the world, including national teams.