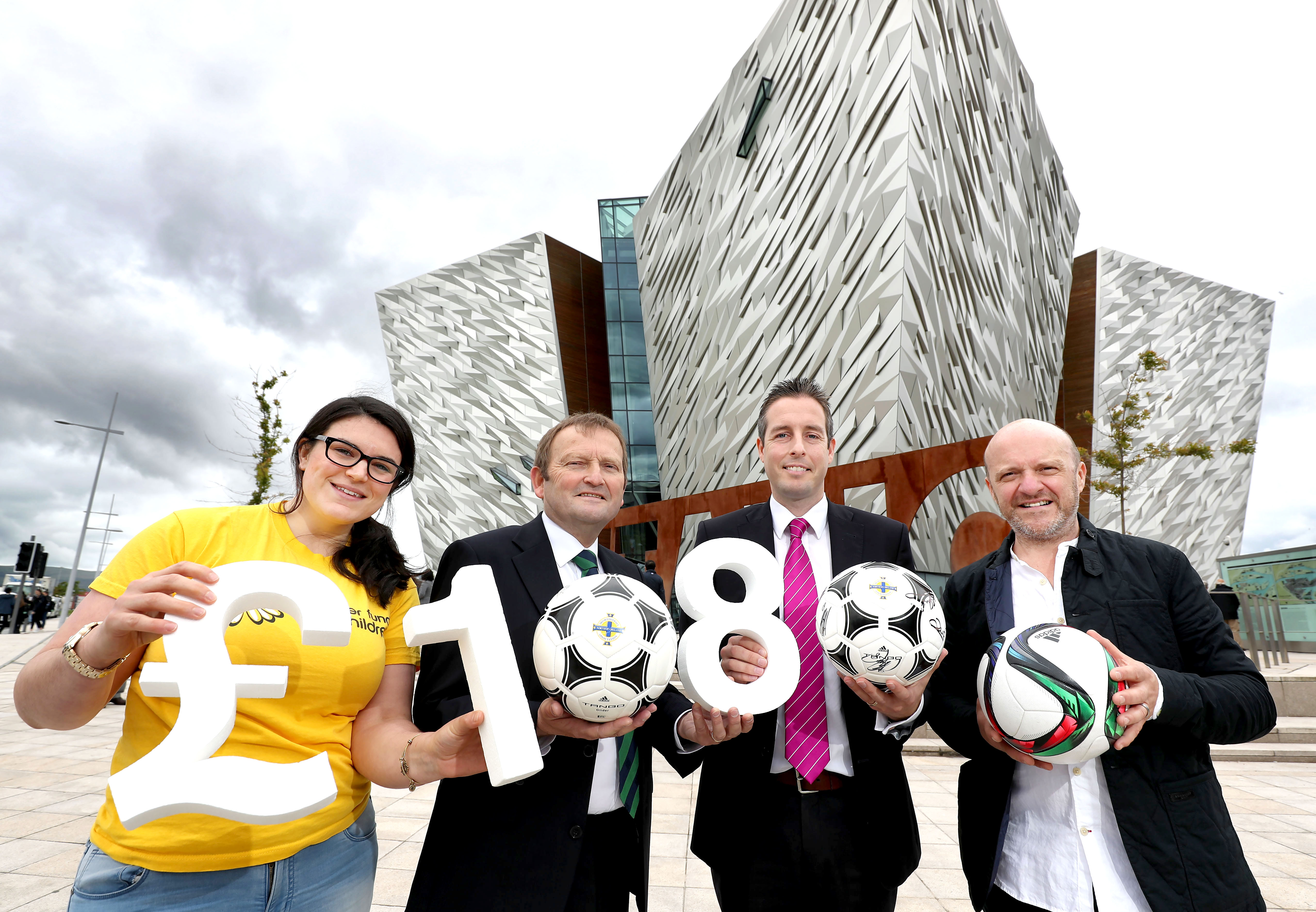 Sports Minister Paul Givan was joined today by representatives of the Irish Football Association and Belsonic to present a substantial cheque to the Cancer Fund for Children charity.

The money, amounting to £10,800, was raised through onsite collections during the televised games at the fanzone at Titanic Belfast during Euro 2016 and also through ticket sales for last week’s homecoming event for the Northern Ireland football team.

The Minister said: “The performance of the Northern Ireland team at the Euros was exceptional and the team created history by getting there and qualifying from their group. The players showed their commitment to the jersey and to the Green and White Army who travelled in large numbers to France and also those who came together at home to create a unique atmosphere at the fanzones.

"The homecoming event, which was supported by my department, resulted in more than £8,300 being raised for Cancer Fund for Children through the sale of tickets for the event.  This added to the money collected during all the matches screened at the fanzones and the homecoming event made for a staggering contribution of over £10,800.”

Irish Football Association President David Martin said: “It was great to have the homecoming event. It was a marvellous occasion. The players really enjoyed it and it once again highlighted the close bond between the players and the fans.

“Of course, it is also great that the event has benefitted the Cancer Fund for Children, which was chosen as the Northern Ireland team’s official charity for Euro 2016.
“The members of the squad were all keen to give something back to the community by fundraising to support the charity through various initiatives.”

Sorcha MacLaimhin from the charity said: “Every week in Northern Ireland another three families will hear the devastating news that their child has cancer, and will begin a traumatic and stressful journey of treatment plans and hospital visits, all while not knowing what the future will hold for their family. “On behalf of the charity, I would like to thank the Irish FA, the Northern Ireland football team, Belsonic and the Department for Communities for their amazing support.

“Cancer Fund for Children are delighted to have been working with the Northern Ireland football team and the Irish FA during the Euros, and we really appreciate the support the Green and White Army gave us, raising over £10,000. As a local charity we really rely on support from local communities and businesses in order to provide our vital services to local children and young people affected by cancer.”

Alan Simms of Belsonic said: "Everyone at Belsonic was very proud to have had the opportunity to work on the homecoming event for the Northern Ireland team following their heroic performance at Euro 2016. The fact that, in the process, we also collectively raised thousands of pounds for such a worthwhile charity really is the icing on the cake."