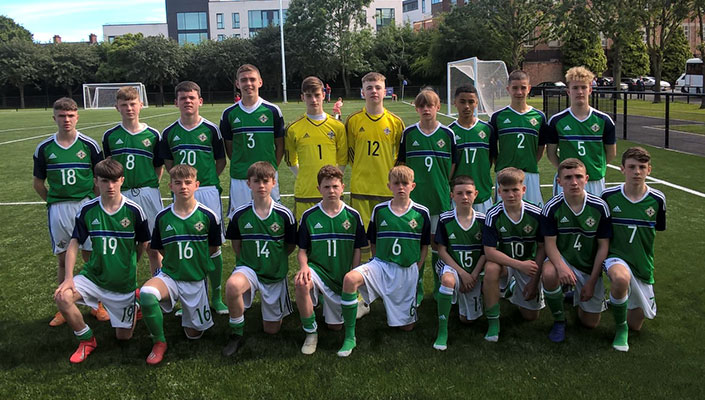 JD Club NI U15s began their preparations for a UEFA development tournament in August by registering a fine 3-1 win over Shamrock Rovers’ U15s in a friendly.

The game against the Dublin side was staged at Ulidia Playing Fields in south Belfast over the weekend – and the visitors provided a good test for the JD Club NI 2005s.

JD Club NI started well but Shamrock Rovers grew into the game and took the lead midway through the first half via a penalty.

Michael McClean’s Northern Ireland team responded well, however, and drew level just before the break with a goal from the lively Ethan Soussa.

In the second half the visitors enjoyed a lot of possession, with Club NI providing a threat on the break.

Club NI took the lead thanks to a slick counter-attack which was finished off well by Shea Brennan.

In the latter stages of the match Padraig McVicker added another goal with a lovely finish. He expertly lobbed the Shamrock Rovers goalkeeper from outside the box.

The JD Club NI 2005 squad will now step up their preparations for a U15 UEFA development tournament in Wales. It is being staged in Wrexham from 12 to 17 August and will feature Cyprus, Malta, Northern Ireland and Wales.

Before then several of McClean’s squad will be in action at SuperCup NI, the annual international youth football tournament, which kicks off on July 28 and runs until 2 August in venues across the north and north-west of Northern Ireland.