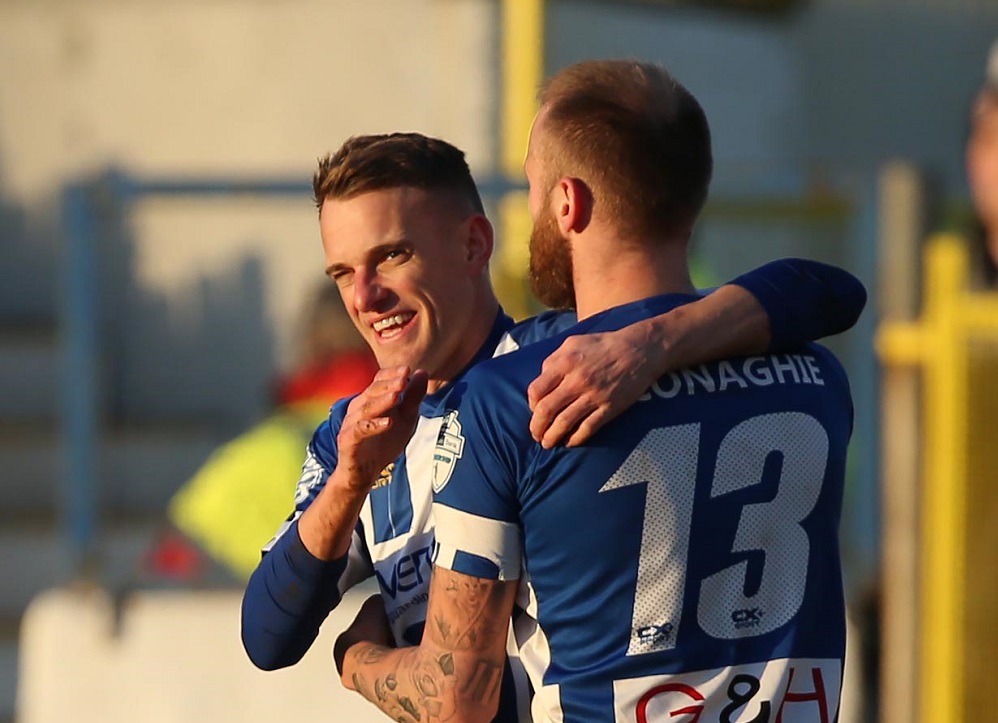 Holders Coleraine continued their defence of the Tennent's Irish Cup with a Sixth Round defeat of Dergview in one of just four ties to beat the weather.

Here's how the afternoon progressed:

Rodney McAree's side needed just three minutes to move in front with a magnificent 25-yard strike from Doherty after he had come forward from the middle of the park.

McLaughlin added a second on 22 minutes, volleying into the net from close range from Mark Edgar's cross.

Then, midway through the second half, Shiels put the game to bed with a back post finish after a corner had evaded everyone else in the box.

All the drama in this one came in extra-time.

The game was scoreless after 90 minutes although Kyle McClean and Michael O'Connor had both struck the woodwork for the Blues while Crusaders were denied when Matthew Snoddy's last gasp effort was cleared off the line.

However, the Crues did break the deadlock through Jordan Owens' thunderbolt finish from the edge of the area into the top corner.

Back came Linfield in the closing minutes of extra-time through new Czech signing Marek Cervenka after he pounced on a poor backpass from Rory Hale.

But, with barely moments left, the pendulum swung back in Crusaders' favour with Billy Joe Burns' left-foot half volley to put the lid on what had become a gripping finish.

Star seized the initiative after 14 minutes through Joe McNeill after he nipped in to flick the ball past Conor Devlin from close range.

However, Larne levelled when Jeff Hughes powered home a header on 26 minutes from a Martin Donnelly corner while Donnelly might have found the net himself before the break only for keeper Shane Harrison to touch an effort onto the post.

Then, right at the end, McDaid made sure of Larne's place in the next round when he tucked the ball home at the back post.

Amateur League side Larne Tech Old Boys were the first team into the hat for the quarter-finals thanks to two goals from Craig Todd and one from Paul Maguire to see them past Strabane Athletic.

Maguire opened the scoring after ten minutes with a flicked header past keeper Jack Boggs before Todd made it 2-0 on 55 minutes with a well struck right-foot finish after Maguire's initial effort had come back off the post.

Both sides were then reduced to ten men when Scott Todd and Strabane's Kyle Harte were dismissed following an altercation in the middle of the pitch.

Craig Todd made sure of Larne Tech's progression with a smashing finishing into the top corner before Aaron Patterson pulled one back at the other end.

Strabane ended the game with only eight players when both Dylan Forbes and then Luke McGeehan received their marching orders later in the game.