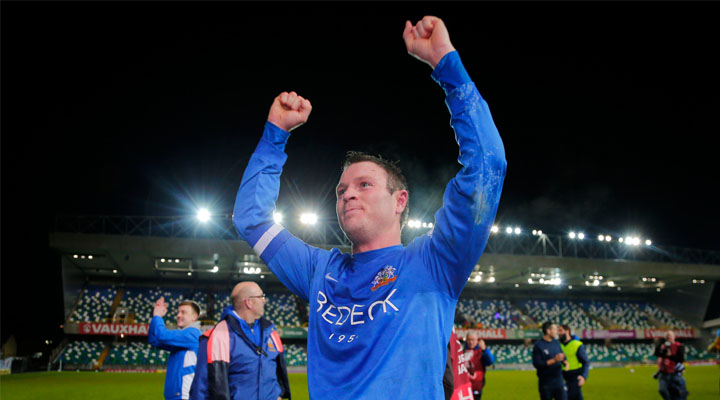 Glenavon remain on course for their second Tennent’s Irish Cup win in three seasons after beating Crusaders 4-3 in a pulsating game at the National Football Stadium at Windsor Park.   Man-of-the-match, Kevin Braniff, was the hero from the Lurgan Blues as he scored all four of Glenavon’s goals in what was a stunning display from the veteran frontman.

Gary Hamilton’s side will now face Lurgan Celtic or Linfield in the final which will be played on 7th May.   The Crues opened the scoring on 24 minutes. Gavin Whyte made a superb run down the right wing. His cross into the box found Jordan Owens who cushioned a header back into the path of Matthew Snoddy who made no mistake with the sharp finish.

However, Glenavon were back on level terms just three minutes later. Kevin Braniff ran into space just outside the Crusaders box. He looked up and the 33 year-old placed a superb curling shot into the top corner beyond the reach of the diving Sean O’Neill.

Glenavon were then guilty of switching off as Crusaders went straight down the other end and scored just 30 seconds later. Matthew Snoddy’s shot from distance was too good for Jonathan Tuffy as Stephen’s Baxter’s side went back into the lead once again.

That’s how it stayed until 42 minutes. Just as it looked like Crusaders would go in ahead at the break, an unmarked Braniff scored Glenavon’s and his second of the night to make it 2-2.

The second half started as the first one ended – with a goal. Crusaders played the ball wide. A great cross from the right wing and found an unmarked Paul Heatley and he made no mistake with the sharp finish to make it 3-2 to the Crues.

It was all square again on 53 minutes. This time it was a header from Braniff from a pinpoint cross from Andy McGrory that found the net.

Then came the move of the night. Declan O’Brien showed great strength to shrug off defenders, his low ball found that man Kevin Braniff who calmly placed the volley into the bottom right hand corner.

Crusaders pushed for an equaliser but could find no way past Glenavon who defended superbly in the game’s final quarter.   It is they who now have the chance of glory on 7th May.  FULL TIME GLENAVON 4 CRUSADERS 3